Port Strikes and All

India is emerging as one of the biggest economies and consumer markets in South East Asia. They have shown tremendous growth in the previous fiscal years and in 2016 the growth rate was recorded to be 7.11%.

Indian ports have played a significant role in strengthening the exports ratio in the last couple of years. There are 12 major and 200 intermediate ports in India, which constitutes 95% by volume and 70% by value, to the total Indian trade. Over a period of 10 years, cargo-traffic at major ports has risen by 7.4%. It stood at 463.6MMT in 2007 and has now increased to 943.1MMT. 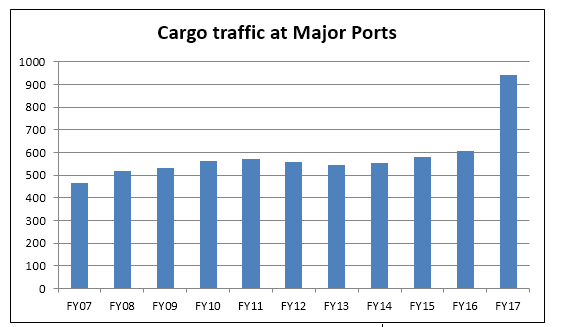 Indian government understands that ports play an important role in accelerating and sustaining the economic growth in the country. They announced a 10 year tax-holiday to the sectors who will commit to invest in the development of ports. However, recently conflicts are rising between the labor unions and the private sectors, which have hindered the activities at the major ports of the country.

One such incident was observed recently, when a consortium of leading labor unions announced an indefinite port strike starting April 19, 2017. The strike was announced to bring labor demands in government’s notice. Labor unions, across the country, feared that privatization of the ports would mean less job security for the labors working on the port. The primary aim of the strike was to persuade the government to make changes to the existing Port Authority Bill 2016, which looks after the activities on the major ports in India. However, the strike was postponed after the preliminary talks between the chief labor commissioner and the representatives of the labor unions.

India is making continuous efforts to maximize the utility gained from the major ports of the country. For this purpose, government has initiated several development projects under public and private partnership programs.

Jawaharlal Nehru Port is the largest container handling port in India. The trust associated with the development of the port has signed a contract to raise 400 million in US dollars, to improve the infrastructure and increase the existing capacity of the port. They aim to achieve the target by partnering with Development Bank of Singapore and the State Bank of India.

In addition to this, the government is trying to reduce the logistics cost by investing in the development of 37 national waterways over the course of three years.

Investments made through public and private partnerships, for the development of national ports in India, will increase the cargo traffic and trade activity in the country. The economy will be positively impacted by the overall efforts of the government and the private sector. However, if government fails to settle the conflicts with labor unions and port strikes continue to happen then the country will not experience the projected economic growth.