With the introduction to mega-ships, the ports across the nation have needed some beefing up.  Our nation’s ports play a big part to our economy as they connect our nation with markets overseas for both imports and exports.  Not only do the ports act as a gateway for various commodities, but they also serve as employment to nearly 13.3 million workers in the United States [source].  “According to porttechnology.org, for every $1 billion in exports shipped through US seaports, 15,000 domestic jobs are created.”

The problem still lies in the fact that our ports can’t handle the sheer volume of containers or the actual size of mega-ships that plan to continue route to the United States.  We saw this in the Port Congestion problem that began in 2014.  As a solution, the ports and terminal operators are building larger, modern facilities with new automation.  JOC states that they plan to invest billions of dollars in the expansion of marine terminals and their land-side connectors to the intermodal rail and roadway networks. Furthermore, they are testing new processes with the idea to battle port congestion. 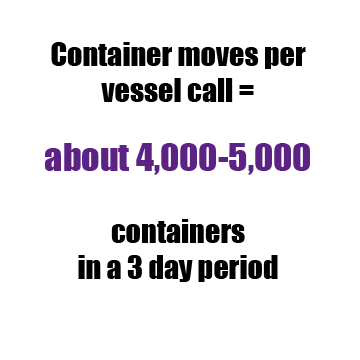 “Carriers operating in vessel-sharing alliances are now deploying vessels that hold the containers of six or more lines, adding to the complexity of cargo handling and container delivery at many ports. In Los Angeles/Long Beach, containers are scattered over 13 terminals, each with its own operating system and processes. Most large ports have four or more container terminals.” [source]

And speaking of complexity….

On December 26th 2015 the first 18,000 TEU mega-ship, the CMA CGM Benjamin Franklin arrived at the Port of Los Angeles and continued on to the Port of Oakland 5 days later.  To this point, it is the largest containership to call a North American port.

What can we expect in the future?

According to The Journal of Commerce, “Although congestion on both coasts in early 2016 has eased considerably from what it was at the same time last year, even today’s relatively modest growth rates exceed ports’ ability to handle the volume. At 3 percent annual growth, U.S. container volume will double in 24 years, and much of the growth will be concentrated in a few major gateways, the FMC noted.”