President-elect Donald Trump has chosen Elaine Chao for Transportation Secretary.  Chao served as Secretary of Labor under President George W. Bush and is married to Senate Majority Leader Mitch McConnell. Elaine Chao is the first American woman of Asian descent to be appointed to a President’s Cabinet in our nation’s history.  Having served from 2001-2009, she is the longest tenured Secretary of Labor since World War II, and the only member of President George W. Bush’s original cabinet to have served the entire eight years of his Administration.  [Source].

The transportation post could become a vital one in a Trump cabinet given Mr. Trump’s desires to see $1 trillion spent on revitalizing the nation’s roads, bridges, ports and other systems of public transit. 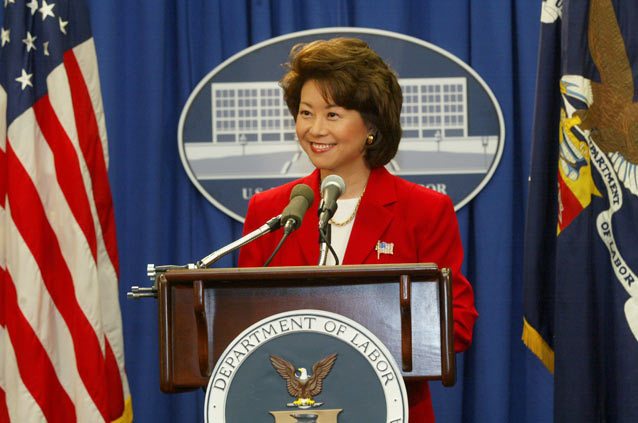 “Secretary Chao’s extensive record of strong leadership and her expertise are invaluable assets in our mission to rebuild our infrastructure in a fiscally responsible manner,” Trump said in a statement. “She has an amazing life story and has helped countless Americans in her public service career.” [USA Today]

“The President-elect has outlined a clear vision to transform our country’s infrastructure, accelerate economic growth and productivity, and create good paying jobs across the country,” Chao said. “I am honored to be nominated by the President-elect to serve my beloved country as Transportation Secretary.” [USA Today]