Recap: State of the Port of Los Angeles Address

Director of the Port of Los Angeles Gene Seroka highlighted both the challenges of a volatile year and optimistic goals for the year and decade ahead in the sixth annual State of the Port address Thursday, January 14.

The address, typically delivered in person as a prominent industry network event, took a new form this year. Seroka presented his comments from the deck of the battleship USS Iowa at anchor in San Pedro Bay. Meanwhile, spectators watched on from via a live YouTube broadcast.

Seroka and company delivered a thorough and detailed account of the port’s 2020 performance despite the change of format.

Seroka pointed to COVID-19 as the single most crucial factor for operations at the Port of Los Angeles in 2020.

The pandemic all but halted global trade in the first half of the year, stifling volume and activity at ports worldwide. Los Angeles was no exception.

“Our container business, the port’s primary economic driver, was the most erratic that we have seen to date,” Seroka said.

According to Seroka, container volume at the port dropped 19 percent by May 2020 as nations shut down non-essential activity to curb the spread of the virus. Then, a pent-up consumer demand created a buying surge in the second half of the year that boosted volume by 50 percent.

“The week before Christmas we handled nearly twice as much cargo as we did in the same week in 2019,” Seroka said.

Volatility at the Port of Los Angeles challenged both the port itself and those further down the supply chain. Seroka noted drayage delays, COVID-19 safety protocols, labor availability, and overall operational inefficiencies as common obstacles.

But despite these challenges, Seroka kept his tone confident and optimistic.

“In this time of crisis, we were called to be responsible. We focused on what we could do to have the greatest possible impact,” Seroka said. “We showed we were flexible enough to bend with the times but never break.”

Setting Goals for the Port of Los Angeles

Seroka spent a generous portion of his address looking ahead. He outlined a robust plan to improve port operations, infrastructure, emissions, and more.

Digital solutions will play a key role in the development of the Port of Los Angeles. Seroka himself called digital maturity “the most immediate advance we can make” to improve efficiency.

Seroka highlighted multiple efforts to streamline port operations via data and analytics. The goal, he indicated, is to prepare the Port of Los Angeles and others to routinely handle high volume like the 1.8 million TEUs processed in October alone.

“This month, we are going to our board with a proposed truck turn time and dual-transaction incentive program that pays our container terminals for monthly turn time improvement,” Seroka said. “We not only want faster turn times; we want to keep those turns efficient so a trucker can bring a box to a terminal and leave with another one instead of going away empty.”

The Port of Los Angeles has expansive plans for infrastructure improvements. According to Seroka, the port will spend $473 on bay, terminal, rail, and roadway projects.

Director Seroka also doubled down on the port’s commitment to significantly reduce emissions over the coming decades. The Port of Los Angeles currently operates under a Clean Air Action Plan. It aims to use zero-emissions terminal equipment by 2030 and a zero-emissions drayage truck fleet by 2035.

According to Seroka, the port is currently testing 78 zero-emission trucks in partnership with Toyota. The port has worked with Los Angeles Mayor Eric Garcetti to kickstart conversations with private entities about speeding up development and implementation of zero-emissions equipment.

“Make no mistake — this monumental mission is our Apollo Project,” Seroka said.

Preparing the Port for 2021

While acknowledging the challenges ahead for the Port of Los Angeles, Seroka doubled down on his tone of resilience and determination.

“Yes, cargo and maritime activity was set back by our global health and economic crisis,” said Seroka. “However, when the institution you run is 113 years old, you learn not to compare a down year to the one that came before it. You focus on the years of growth that will rise out of what you learned from an extraordinary series of events.” 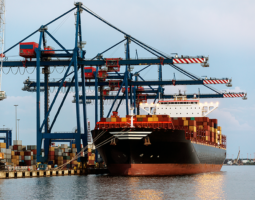