Two days after the Senate rejected an initial effort to advance trade and customs legislation, a compromise between Republican and Democratic leaders allowed the chamber to vote on the bills May 14.

Under the terms of the compromise, the Senate first voted on legislation to extend the Generalized System of Preferences, the African Growth and Opportunity Act and trade preferences for Haiti, which passed by a 97-1 vote, as well as a customs reauthorization measure aimed at strengthening trade facilitation and enforcement, which was approved 78-20.

The Senate then voted 65-33 to begin debate on a bill combining a reinstatement of trade promotion authority and an extension of the Trade Adjustment Assistance program. Debate is expected to begin next week and numerous amendments are likely to be proposed, leading some observers to speculate that a vote will not happen before the congressional Memorial Day recess begins May 22.

Assuming the measures are approved in the Senate they will face a tougher fight in the House. Some press reports suggest that concerns over the currency manipulation provisions in the Senate-passed customs reauthorization bill could doom efforts to bring that measure up for a vote in the House, though other reports are more optimistic. It is also unclear whether the TPA bill will be able to clear the House given that it faces substantial bipartisan opposition.
{Photo Source: Depositphotos.com/4zeva} 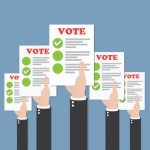