Ships stack up outside Los Angeles and Long Beach

Ships stack up outside Los Angeles and Long Beach

The number of ships waiting for berths at the ports of Los Angeles and Long Beach climbed to 21 on Saturday, including 20 containerships, according to Kip Louttit, executive director of the Marine Exchange of Southern California.

Including ships not at anchorage because of congestion, there were 32 ships at anchor on Saturday. These include ships at anchor for other reasons such as bunkering, hull cleaning and Coast Guard inspections.

Louttit said that the Southern California ports have begun using “contingency” anchorages because of heavy volume. He said if all contingency anchorages fill up, the port will begin to use offshore “drift boxes.”

By 7 a.m. Monday, the number of ships at anchorage because of congestion had fallen to 16, including 15 containerships.

The number of ships at anchorage off U.S. West Coast ports has climbed as contract talks between the International Longshore and Warehouse Union and employers, represented by the Pacific Maritime Association, have dragged on. The two parties began negotiating in May on a contract that expired July 1, 2014. 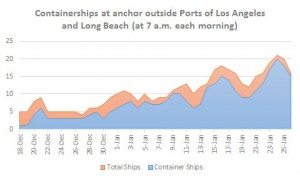 Earlier this month, terminals eliminated night time ship-to-shore container crane operations at the ports of Los Angeles and Long Beach in order to concentrate manpower on clearing congestion at terminals.

The ILWU contends that workers have freed up space at those terminals and should resume working ships at night.

PMA eliminated ship-to-shore crane operations at night earlier this month, saying it did not make sense to bring additional containers into already congested terminals. PMA said the union has not been dispatching the qualified employees it needs to clear containers inside its members’ terminals.

Meanwhile, the London-based consultancy Drewry said that cargo volumes to ports on the U.S. West Coast in November were flat, while up sharply to the U.S. East Coast.

Drewry said in November “traffic totals for the USWC ports showed a slight decline. On the other hand, volumes to the East Coast terminals climbed by 14.6 percent, which underlines the extent to which goods were still being switched to an eastern seaboard routing as it was clear to all at that stage that the talks between the PMA and ILWU over a new USWC port labor agreement had effectively reached stalemate.”

On Friday, Harold Daggett president of the International Longshoremen’s Association, the East Coast longshore union, said “We will closely monitor any attempts by shippers to try and divert cargo to ILA ports. This tactic by employers will not be successful – we are one and will support our ILWU sisters and brothers.”

Drewry, said it believes eastbound volumes in the transpacific this year “are likely to be strong as America’s economy continues to improve.”   It said the slowdown in November volumes “has not unduly concerned the carriers. The month marks, after all, the start of the winter slack season and the 12-month rolling growth average still pointed to a solid 5.6% gain.”

Drewry said carriers are “paying more attention to broader economic indicators rather than to any shorter-term slack season lifting statistics in order to gauge whether 2015 will continue to see healthy levels of throughput growth in the eastbound trade lane. All the signs are that it will.”

It pointed to statistics showing the U.S. economy added 252,000 jobs in December, with the unemployment rate dropping to 5.6%, and single-family housing starts climbing to its highest level since March 2008.

“Eastbound capacity was not trimmed back so much in November as it had been in October, and slot supply in the final month of 2014 more or less reverted to levels provided in the summer,” Drewry said. While while fourth quarter capacity to the U.S. West Coast fell 2.7 percent compared to the previous three months, it is still 7.4 percent higher than it was in the fourth quarter of 2013 and “and by November load factors were dropping appreciably below 90 percent.”

On Friday, container spot rates between Shanghai and the U.S. West Coast as measured by the Shanghai Containerized Freight Index were $2,063 per FEU, down $26 from the prior week, but up $133 from two weeks earlier. From Shanghai to the U.S. East Coast the spot rate was $4,748 per FEU, up $1 from the prior week, and up $248 from two weeks earlier as measured by the SCFI.