Strike could shut down the St. Lawrence Seaway starting Friday

The union is concerned about jobs as Seaway plans to install automatic mooring system.

St. Lawrence Seaway workers are planning a strike that would shut down the waterway starting Friday.  Unifor, a Canadian union with 460 members belonging to five locals that work along the Seaway, has served 72 hours notice of a strike that could begin Friday afternoon at 12:15 p.m.

Unifor said a key issue is staffing levels at the locks as the Seaway moves to automatic mooring, eliminating the need for workers currently working at locks among the Seaway.

Andrew Bogora, a spokesman for the St. Lawrence Seaway Management Corp., which operates 13 locks on the waterway for the Canadian Government, said his agency was still optimistic that a strike could be avoided and that talks were ongoing.

There has not been a strike on the waterway since 1968.

The Seaway announced earlier this year that, as part of a $487 modernization program, it plans to install a hands-free mooring system that would use vacuum pads to hold ships in place as they are raised in lowered in locks instead of ropes or wires. An automatic mooring system is already in place in one of the Beauharnois locks in the Seaway, and three more are under construction.    Sheri Laekeman, president of Unifor Local 4212, which represents workers along the Welland Canal, said, “Having no personnel at the dock, however, leaves the ships vulnerable to a mechanical failure and the real possibility of an environmental disaster.”

Laekeman said “workers at the locks do much more than just secure ships in place with ropes and wires. They are the eyes and ears that keep watch for a potential crash, ready and able to act fast when needed,” she said. “It is not unusual for a ship’s engines to cut out at the slow speeds often needed to maneuver into a lock. These are big vessels, weighing several tonnes themselves, with thousands more tonnes of cargo onboard. When their engines cut, their momentum keeps them moving.”

Unifor is calling for minimum staffing levels on the locks to deal with emergencies.

“We believe that having no one at the lock is not a good idea,” said Unifor National Representative Joel Fournier.

“The risk of an environmental disaster with all of the dangerous cargo going through the Seaway is very real.”

Bogora said 100 workers would be affected by the use of the automatic mooring system, but that some will be given new job opportunities such as equipment maintenance. Of the 67 jobs that will be eliminated, he said the Seaway believe that most, if not all, can be phased out through normal worker attrition over the five years it will take to install the machinery.    Strike notice was served at the resumption of contract talks in Cornwall, Ontario, the first time the two sides had met in months. Unifor filed for federal conciliation in August.

Canada’s St. Lawrence Seaway Management Corporation said as a result of UNIFOR’s strike notification, it has has started implementing its detailed plans for an orderly and safe shutdown of the system within the 72-hour notice period. Should the unionized workers proceed with strike action, as scheduled, the St. Lawrence Seaway will be closed to all traffic.   Contrary to union allegations, the SLSMC said it “is confident that it will continue to process ships through its locks in a safe and secure manner.”

SLMC manages the canal along with the Saint Lawrence Seaway Development Corp. in the U.S., a federal agency within the U.S. Department of Transportation. Workers in the U.S. are not involved in the Unifor contract negotiations.

The Eisenhower and Snell locks in upstate New York operated by the St. Lawrence Seaway Development Corp. are not operated by Unifor members,

but traffic through them would be affected by a strike because ships going up or down the seaway have to pass through the Canadian locks. 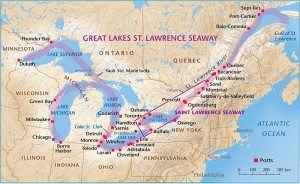