Teamsters cause Chaos at LA port

The Teamsters said that on the fourth day of a strike by port truckers at the Ports of Los Angeles and Long Beach “picket lines are expected to be strong at trucking company yards and headquarters, and at marine terminals, causing widespread chaos with the companies’ – and terminals’ – operations.”

According to a press release issued by Justice for Port Truck Drivers, which is part of the Teamsters Port Division, “Long truck lines are expected at the ports of LA and Long Beach, as drivers and their allies picket Green Fleet Systems, Total Transportation Services, Inc., and Pacific 9 Transportation trucks.”

The group also said that striking employees will issue a call Thursday morning for the port of LA to “get off the sidelines and take a constructive role in resolving the ongoing strike.”

The Teamsters say that “Green Fleet drivers undergo daily harassment and mistreatment from management,” and that this led drivers to file unfair labor practice charges against Green Fleet Systems. The charges resulted in Region 21 of the National Labor Relations Board issuing a consolidated complaint against the company.

Green Fleet issued a statement earlier this week in which said it was “discouraged to learn that outside interest groups have again decided to block the rights of these drivers to go to work and earn a living.”

It said, “An overwhelming majority of contractors and drivers affiliated with Green Fleet don’t want these groups involved in their work.” 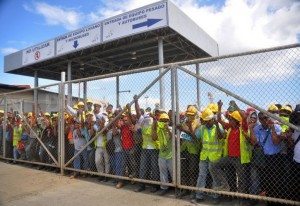