ILWU and PMA take a Break

Late last evening (Eastern time) the ILWU and the PMA issued a statement saying that they had agreed to take a 72 hour break from negotiations while the ILWU “attends to an unrelated negotiation taking place in the Pacific Northwest.”  During this break the contract will be temporarily extended until 8:00 am pacific time on Friday, July 11.  You can read the joint announcement here. 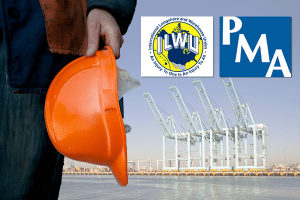 I have had one unconfirmed report that PMA is holding a meeting today with key executives.  This would make some sense since there is a hiatus in the talks, and the 72 hour break would give PMA a chance to take stock of where they currently stand.  If I get any confirmation of this report, I will send it along to you.  In any event, I think you should view this break in negotiations positively, especially since both sides agreed to a 72 hour extension of the contract, which means that the no-strike clause remains in place.

Finally, I want to stress that yesterday’s Teamsters’ action was not a “strike” as has been widely reported in the press.  It was part of the Teamsters’ ongoing effort to organize short-haul trucking operations and so, by definition, it was not a strike.  Since it was not a strike, the demonstrations were not “picket lines,” and the ILWU was under no obligation to honor them.  The ILWU has gone to great lengths on social media to correct the characterization of yesterday’s Teamster activities as a strike.