We aren’t out of the woods yet. Supply chains have endured a perpetual peak environment for a full year with record-setting container volume slamming U.S. ports. Now, traditional shipping peak season has arrived once again. A slew of circumstances is setting up this year’s peak season to be a challenging one.

While volumes and rates have not tapered significantly, some ports have experienced brief lulls compared to the congestion seen earlier this year. According to JOC.com, the Port of Los Angeles had reduced its waiting vessels to 11 at anchor. That’s down to a high of more than 40 waiting outside the port a few months ago. A range of factors threaten to undo that progress, however.

FreightWaves reports that the number of vessels waiting outside the Port of Los Angeles is on the rise once more. July is on track to be the busiest in the history of the complex. Reports predict August to produce even worse congestion as the traditional surge of pre-holiday goods arrives.

Already, according to JOC.com reporting, the ports of Los Angeles and Long Beach are experiencing everything from chassis shortages to growing container dwell times.

A wave of containers is poised to surge into west coast ports following the southern China shutdowns. The Port of Yantian has bounced back to full operations after a local coronavirus outbreak forced a near total closure of the complex. The incident caused delays and disruptions to rival the Suez Canal obstruction. Now, the port is working at a breakneck pace to clear the backlog of containers.

The Port of New York and New Jersey has had a particularly strong run. According to a report from The Loadstar, the complex officially surpassed Long Beach as the second-busiest port in the U.S. June numbers showed a 19.2 percent jump from pre-pandemic numbers. New York /New Jersey now sits behind just Los Angeles in terms of monthly throughput. As peak season begins, high volume may put east coast ports in similarly congested positions to their west coast counterparts.

While import volumes surge at coastal ports, inland rail and intermodal troubles are magnifying the problem.

Much of the congestion that plagued coastal ports earlier in the year naturally moved inward along rail and trucking routes. As a result, container depots became mired in backlogs and bottlenecks. Just as many have seen on the west coast, the constant influx of cargo buried lingering containers and created severe delays.

Union Pacific’s Global IV intermodal terminal near Chicago saw some of the worst congestion. The backlog became so severe in July that UP itself opted to pause all international container transit services from multiple west coast ports for a week. The move allowed UP to clear its Chicago terminal backlog. But it also stranded tens of thousands of containers across the coast — compounding existing delays.

This year’s peak season is set to create challenges for importers. But proactive planning can prepare your supply chain for the worst. From securing vessel space to navigating customs clearance, Scarbrough is ready to guide your freight home in time for the holidays. Contact us to start planning today. 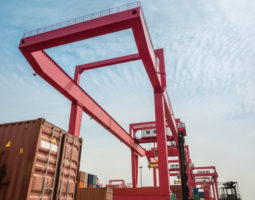