The real cost of Thanksgiving

The real cost of Thanksgiving

Here’s something to give thanks for.

Astonishingly, despite the worst avian flu to hit poultry producers in decades and heavy rains that washed out Illinois’ pumpkin crops, we won’t be seeing shortages of our Thanksgiving staples. 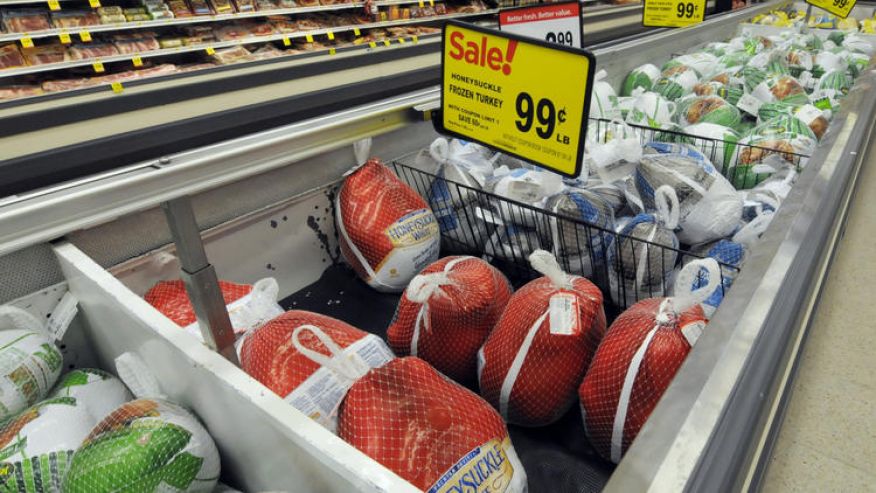 Frozen turkeys are likely to be much less expensive than fresh birds this Thanksgiving. (Associated Press)

But that doesn’t mean costs for the feast are going down.

Compared to 2014, holiday hosts will have to shell out a bit more dough to get their favorites to the table.

When it comes to fresh turkey, you’re going to pay about 15 percent more or $1.60 per pound compared to $1.36 per pound last November.  Most birds that will be sold fresh were hatched after the avian flu outbreak passed, and wholesale prices have been rising. So while not scarce, fresh turkeys will be harder to come by the closer you get to Turkey Day (experts like farmer Forrest Pritchard from Smith Meadows Farm in Virginia recommend ordering ahead for a primo heritage bird).

If you’re looking for a frozen whole turkey, which make up as much as three-quarters of the Thanksgiving market, you may actually be paying less, despite the avian flu wiping out 8 million turkeys.  That’s because those turkeys were already born, slaughtered and frozen before the outbreak, says Thomas Elam, president of FarmEcon LLC, a consultant to the poultry industry.

It also helps that retailers had plenty of time to compensate. Wal-Mart expects to have more frozen turkeys than in previous years, and prices actually will be lower than last year, says spokesman John Forrest Ales. For example, a 16-pound premium frozen Butterball will cost about 64 cents per pound less than last Thanksgiving.

Things didn’t look so good earlier this year when it came to eggs, an essential ingredient to many sides and desserts. The avian flu wiped out a record number of egg-laying hens causing shortages and prices to skyrocket over the summer. In late August, the average price for a dozen large eggs climbed to $2.94, according to the Bureau of Labor Statistics. But the USDA reports that the price of eggs has started to level out –although they’ll still be pricier than 2014 figures—averaging $2.96 for a dozen of Grade A large eggs.

And what about those pumpkins?

Record rains early in the growing season did slash pie-pumpkin yields by about 50 percent in Illinois, by far the country’s top producer. But market leader Libby’s still expects canned pumpkin supplies to last through Thanksgiving and the shortage probably won’t be felt until after the holiday baking season, says company spokeswoman Roz O’Hearn.

A 29-ounce can of Libby’s retails for about $3 but pumpkin pie enthusiasts who aren’t willing to take any chances may end up spending much more.

Cans of the orange pureed squash are going for as high as $22 for a pack of three on eBay—and it may not even get to you before Thanksgiving.

You won’t need to get whipped up about dairy this year. Butter for all those mashed potatoes and pie crusts has dropped to around $3.08 a pound compared with $3.82 a year ago. Milk is down to $2.22 a gallon compared with $3.78 last year.

The rest of the meal mostly comes down to produce, usually the least expensive component. While the California drought has pushed vegetable and fruit prices higher, the picture at the supermarket is mixed.

Retail prices are up for russet potatoes (24 percent); spaghetti, acorn and butternut squashes (about 17 percent); and sweet potatoes (10 percent); but cranberry prices are down (14 percent), according to the USDA. And some retailers still are able to find and pass along savings. Wal-Mart is selling asparagus for about 9 percent less than last year and 3-pound bags of sweet potatoes are going for 85 cents less.

So how much is Thanksgiving really going to cost you this year? The average cost of a Thanksgiving dinner for 10 people has hovered around $49 per person since 2011, and it tends to track closely with the consumer price index for food eaten at home, according to the American Farm Bureau Federation.

The CPI for supermarket food as of September was just 0.8 percent higher than a year earlier so you could expect to pay over $52 per person in 2015.

But there’s good news for holiday travelers this year.

Air ticket sales experienced a slight year-over-year increase compared to 2014. According to  Airlines Reporting Corp., which processes ticket transactions for airlines and travel agencies, prices are up 0.3 percent—or a 69 cent average increase.

So getting to the feast will cost you less.

The Associated Press contributed to this report.