The past couple of weeks… well, months… have been a roller coaster of news on the West Coast.  First, the hype of a possible strike at LA Port.  This hype calmed pretty quick.  Although negotiations are not over and an agreement hasn’t been made, talks still seem positive between the PMA and ILWU.

Then, just last week, truckers from three drayage companies walked off the job.  Several terminal workers joined them in support, but quickly returned to their jobs.  After 3 days, the Teamsters Union shut down the strike.

Furthermore and in no relation, members of the ILWU Local 8 in Portland walked off their jobs for about an hour yesterday over a jurisdictional dispute with terminal operator ICTSI.  The ICTSI and ILWU Local 8 worked out the issue without an arbitrator.

To sum it all up, there is a lot of activity going on at the West Coast ports which have caused some small delays in shipments.  Because of the delays, there is a small domino effect, which causes congestion at inland rail ramps.  Again, not a huge issue, especially compared to the history of the West Coast Port Lock-Out of 2002 and Ports Strikes in 2012.  We are currently seeing an average of delays from 3-6 days and at most, up to one week.  The threat of a strike does still remain as it was prior to contract expiration.  With that being said… 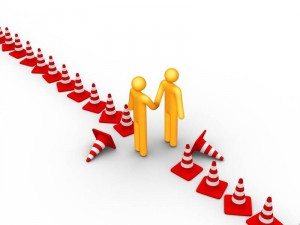 The ILWU and PMA are struggling with the Cadillac tax under the Affordable Care Act that will take effect in 2018. The tax is projected to cost the industry $150 million a year, according to PMA President Jim McKenna. If negotiators are unable to agree upon who will pay the tax, they have the option of negotiating a three-year contract and leaving it to the negotiations in 2017 to be resolved. This remains a possibility, which means the negotiators would do this all over again in three years, adding to uncertainty on the waterfront that shippers, ports, carriers and others would very much like to avoid.  Read more here.