To view up to date information on Section 301 tariffs,
click here.

The 2016 Presidential Campaign targeted “Putting America First,” bringing a fair, bilateral trade strategy to bring jobs and industry back to American shores.  The U.S. withdrew from the Trans-Pacific Partnership (TPP) just three days into the new Administration in 2017 and immediately started working on renegotiating a new NAFTA, as well.  Soon after, the United States Trade Representative started investigations centered around the national security of the United States, bringing to the table a threat imposed on the U.S. economy.  Section 232 of the Trade Expansion Act of 1962, “as amended, gives the executive branch the ability to conduct investigations to ‘determine the effects on the national security of imports.'”  Section 232 is what makes the Administration’s decision a legal one.  With that being said, Section 232 Tariffs on aluminum and steel products from all countries except South Korea, Argentina, Brazil, Australia, and most recently the European Union were formed.  [According to American Shipper, “Amid trade tensions, the leaders of the United States and European Commission on July 25, 2018 agreed to work toward no tariffs in non-automotive industrial goods, seek to resolve current global steel and aluminum tariffs, and hold off on imposing any new tariffs as long as their countries remain in negotiations, among other things.”]

Imports of Steel and Aluminum Products from all countries except South Korea, Argentina, Brazil, Australia, and European Union, Canada, and Mexico

The investigation not only argued that steel and aluminum imports were a threat to national security, but another investigation was authorized in 2017 that argued a threat to the U.S. economy and commerce.  Section 301 of the U.S. Trade Act of 1974 “authorizes the President to take all appropriate action, including retaliation, to obtain the removal of any act, policy, or practice of a foreign government that violates an international trade agreement or is unjustified, unreasonable, or discriminatory, and that burdens or restricts U.S. commerce.”

Last year, U.S. Trade Representative, Robert Lighthizer and his team conducted a 7-month investigation, which found strong evidence that China uses foreign-ownership restrictions to compel U.S. companies to transfer technology to Chinese firms, known as Made in China 2025, a 10 year plan originally released in 2015.  In response to the investigation, President Trump announced a plan to impose tariffs on about $50 billion of Chinese annual imports into the United States targeting more than 100 different types of Chinese products. The value of these tariffs are based on U.S. estimates of economic damage caused by intellectual-property theft by China.  Then, in retaliation to the U.S.’s tariff announcement, the Chinese government also announced its own intent to impose tariffs imported from the United States, also valued dollar for dollar at $50 billion (in 2017).  This marks the beginning said “trade war.”  As of today, three 3 lists for imposed and potential tariffs on have been announced for a total of over $250 billion in products from China imports into the United States alone.

In fact, as of August 1, 2018, Trump also announced that he may increase the 10% duty rate on List 3, which is currently under public review, to 25% duty.  According to American Shipper, “The Trump administration could raise the level of Section 301 tariffs threatened across $200 billion worth of Chinese imports from 10 percent to 25 percent, a source with knowledge of executive branch considerations told American Shipper Wednesday.  ‘Bear in mind that it’s being considered, not yet done,’ the source said of the news, which was originally reported by Bloomberg on Tuesday evening.”

Since then, a tit-for-tat, on again, off again, headache-type of “trade war” has been in the center of the news involved in U.S. trade relationships with China, Mexico, Canada, the European Union, and India.  The retaliatory tariff information is listed below, along with a tariff timeline including the decision to come to an agreement between the European Union and the United States. 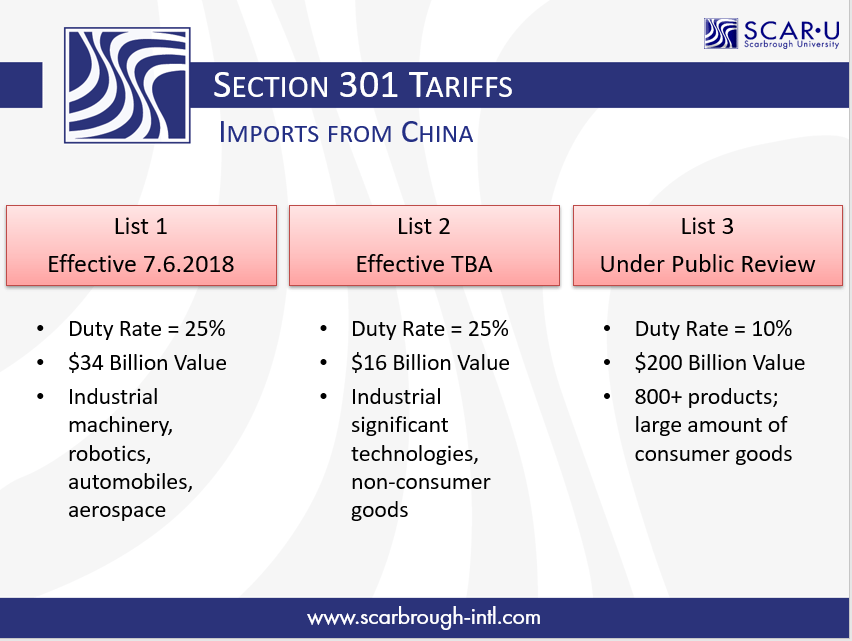 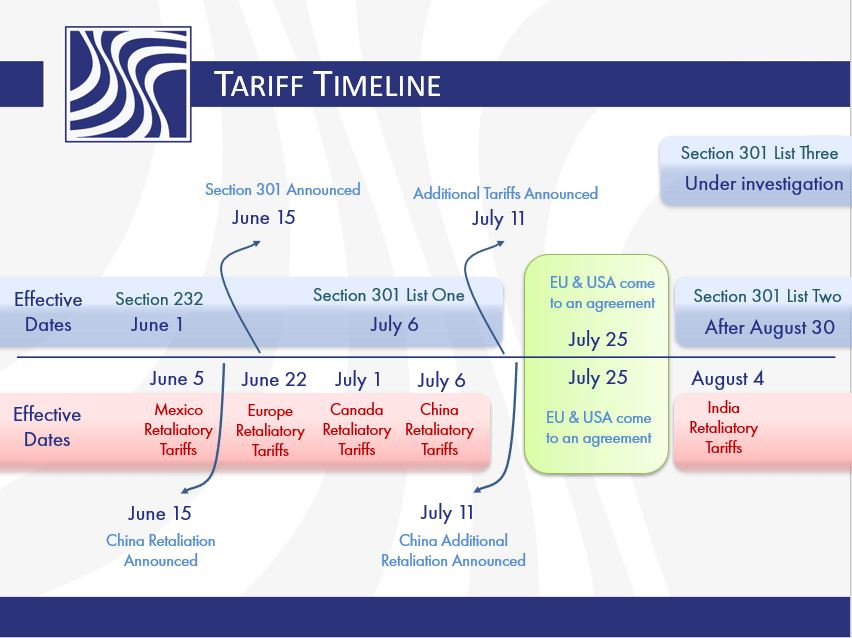 Now comes the big question… how is this affecting organizations’ bottom lines?  They are taking big hits and trying to find solutions. Do they absorb the costs? Do they pass the costs onto the consumer?  Scarbrough International, Ltd. was just recently invited to speak on the tariff situation alongside a local and well-known commercial contractor.  Many organizations and industries (and many of our clients) can relate to is just how hard of a hit the tariffs can be to their bottom line.  For example, one thing we learned at the event, commercial development is taking a hit because of the steel and lumber used for construction.  We learned that one of the contracting organizations is making the decision to absorb the margin loss on current projects, but moving forward, the cost of development will increase significantly.  Does this sound familiar to your situation?

How are the recent tariffs affecting your bottom line? What are you doing about it? We would love to hear from you and compile some anonymous comments together for our next newsletter.  Please email consulting@scarbrough-intl.com or reach out to Evan Moon at 816-584-2414.