There is currently a trucker work stoppage at the Port of Vancouver. There are no containers moving in or out of the Ports for nearly two weeks with protests and the Truckers vote today for full strike.

Below is a message sent from the office of the Minister of Transport advising they have brought in a mediator (Vince Ready who mediated in 2005 strike) with hopes that this will get drivers to return to work immediately, but the strong feeling is that this will still go to strike.

LANGLEY, BC — Unionized container truck drivers at Port Metro voted on Saturday to join a strike by their non-unionized colleagues, who walked off the job earlier last week. Canada’s busiest port has been disrupted this past week by a strike from members of United Truckers Association (UTA), over what they saw as unfair shipping practices. Unifor represents about 400 container truck drivers at Port Metro Vancouver. 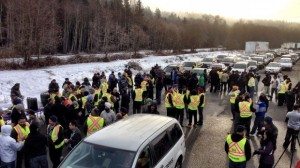 “Both Unifor and the United Truckers Association of British Columbia (UTA), a non-profit group representing union and non-union drivers, have been in talks with the port authority for months over concerns that long wait times at the port were costing drivers money. Most truckers are paid by the load and do not make money while sitting in line.

Port Metro Vancouver has said it is working on new infrastructure and practices to improve wait times at its facilities, and blamed some of the backlog on extreme weather.”