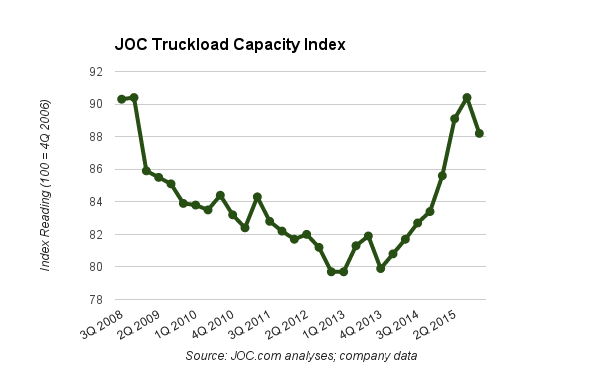 U.S. truckload carriers are warning shippers the rate pressure hat will likely happen in the second half of this year.

The quarterly index fell from a reading of 90.4 in the third quarter to 88.2 according to JOC Truckload Capacity Index. This was the first time it drop to that point since 2014, between this period the economy seem to recovery gained steam.

“We do not plan on growing our consolidated truck count above the 2015 fourth-quarter levels,” Richard Stocking, president and COO of Swift Transportation, said in a Jan. 26 conference call. “We expect our truckload fleet to hold relatively firm throughout 2016, with the only real reduction being realized by potential shifting from the truckload units into other segments,” he said to JOC.

JOC concluded an article in this topic with this point of view. Tell us what you think will happen.

Even with that attrition, the number of trucks produced still could exceed the demand for freight — a situation ACT Research says has occurred in 10 of the last 12 months.