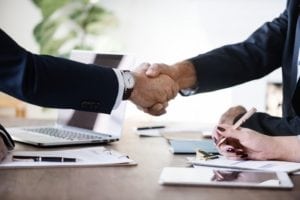 The U.S. and Japan have agreed to enter negotiations on a possible trade agreement.  In a joint statement of The United States and Japan, “President Donald J. Trump and Prime Minister Shinzo Abe, affirmed the importance of a strong, stable, and mutually beneficial trade and economic relationship between the United States and Japan, recognizing that our economies together represent approximately 30 percent of global Gross Domestic Product. The President reiterated the importance of reciprocal trade, as well as reducing the trade deficit with Japan and other countries. The Prime Minister emphasized the importance of free, fair, and rules-based trade.”

The U.S. and Japan are determined to expand trade and investment, including trade in goods and services, following the completion of necessary domestic procedures. “Prime Minister Abe resisted for almost two years the push to start bilateral trade talks with its second-largest trading partner, but Trump’s threatened auto tariffs forced him to reconsider. The two countries have agreed that sanctions on auto exports won’t be applied while the talks take place,” Abe told reporters, according to American Journal of Transportation.

The joint statement also states that the agreement is designed to be mutually beneficial and both countries will respect positions of the other government:

Furthermore, the countries plan to discuss protection for American and Japanese companies and workers from non-market oriented policies and practices by third countries.  The countries, along with the European Union, plan to discuss “World Trade Organization reform and e-commerce and to address unfair trading practices including intellectual property theft, forced technology transfer, trade-distorting industrial subsidies, distortions created by state-owned enterprises, and overcapacity.” To view full text of a statement released after a trilateral meeting between trade ministers of the United States, Japan and European Union, click here.

American Journal of Transportation states that Prime Minister Abe told reporters in the U.S., “Since President Trump took office, Japanese companies have decided on a further $20 billion in investment in the U.S., and this will result in 37,000 new jobs….This is more than any country in the world and it is the result of flying the flag of free trade….We must absolutely not turn back the clock.”

According to American Shipper, “Trade Promotion Authority (TPA) legislation requires the president to provide at least 90 calendar days’ written notice to Congress of his intent to enter free trade agreement (FTA) negotiations. The notice must include the specific U.S. objectives for negotiations and the date on which the president intends to initiate those negotiations. The executive branch also must consult before and after negotiations with the Senate Finance and House Ways and Means committees as well as provisional Senate and House trade advisory groups defined in TPA.”