“This is a momentous step which benefits both our agencies and the international trade community,” said Hector Mancha, CBP Director of Field Operations in El Paso. “We are working side by side cooperatively to streamline the cargo inspection process and benefit the economic competiveness of both nations.”

The Port of El Paso introduced the UCP pilot program at the Ysleta Cargo Facility in April 2018. The UCP concept consists of Mexican Customs officers working side by side with their CBP counterparts in the U.S. to jointly inspect and process cargo shipments destined for the United States. Currently, there are two designated primary lanes and five designated secondary lanes at the Ysleta UCP location.

Under UCP both CBP and SAT receive advance information from the trade community about the shipments from Mexico to the U.S. This information is reviewed to ensure there are no merchandise admissibility issues.

UCP designated shipments bypass the SAT primary processing in Mexico and enter the dedicated Free And Secure Trade – or FAST lane – on the U.S. side allowing the shipment to proceed unencumbered to CBP primary inspection. All FAST traffic is automatically enrolled to participate in the UCP program. This is significant because FAST traffic accounts for approximately 32% of all shipments at the El Paso port.

Under UCP CBP and SAT Officers operate jointly within the same primary inspection booth at the Ysleta cargo compound. While at primary, CBP and SAT officials review the appropriate documentation and determine if the shipment may proceed directly into United States or if further examination is necessary. If no issues exist, the driver and truck are released and the commodity is allowed to enter the commerce of the United States directly.

In the event that an issue is discovered, the shipment is sent for a secondary examination. CBP and SAT conduct joint inspections of all UCP shipments that have been targeted for examination. SAT officials will notify CBP immediately if during their exam they locate any prohibited or restricted merchandise like narcotics, chemical precursors, weapons, munitions, cash or monetary instruments. This is also the case for any goods that may pose a threat to national, border, or public security, or goods that are in violation of U.S. law.  SAT is expected to refer any such shipment to CBP to initiate the corresponding legal action, consistent with applicable U.S. laws, regulations, policies and directives. Once the examination is completed and no issues are identified the merchandise is released into the commerce of the United States. 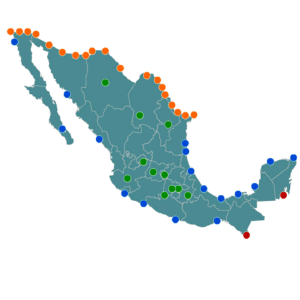 The El Paso UCP has been a work in progress. In March 2018, U.S. Customs and Border Protection Commissioner Kevin McAleenan and Mexico’s Tax Administration Service Chief Osvaldo Santin signed a Memorandum of Understanding on a Cargo Pre-Inspection Program and Unified Cargo Processing. This MOU states the bilateral commitment for the further implementation of Cargo Pre-Inspection and Unified Cargo Processing programs, through which Mexican Customs Officers and CBP Officers will work together to inspect and process cargo shipments.

CBP El Paso intends to expand the UCP concept to the Bridge of the Americas cargo facility, railroad operations, the Ysleta cargo export facility and other ports within the Field Office. Similar UCP’s along the Southwest Border are also operational in Nogales, Laredo and Otay Mesa.