Earlier last week, President Trump threatened to close the border between the United States and Mexico, which would significantly impact international trade between the two countries.  In response, Leadership from the U.S. Customs and Border Protection hosted a public call on April 4, 2019 to explain the situation on the U.S. Southern border with Mexico.  Our friends at NASCO, the North American Strategy for Competitiveness, an organization that promotes and improves North American trade, attended the conference call and shared notes.  See below:

U.S. Customs and Border Protection (CBP) is trying to facilitate trade while dealing with an unprecedented migration crisis.  The volumes and demographics of migrants are unlike anything seen before.  Border patrol resources are beyond capacity.  The last time it was like this was in 2008.

Large groups of migrants are crossing the border, sometimes in groups greater than 100 people at a time, which makes processing more difficult and resources limited.  Moreover, an increased number of sick children that need urgent medical attention are crossing, as well.

The CBP officer on the conference call stated that the entire immigration system is in a major meltdown.  There is not enough capacity to hold people.  CBP releases people with no criminal history into the local communities and into faith-based organizations.

This past week they saw approximately between 3000 – 4200 migrants per day.

According to the CBP officer, South Texas, Rio Grande Valley, El Paso, and Yuma are the hardest hit border crossing points.  An article in the Mexico News Daily also published on April 4, 2019, states, “Cars and trucks continue to face long wait times at several border crossings between Mexico and the United States including those in Ciudad Juárez, Chihuahua, and Nuevo Laredo, Tamaulipas, where delays of up to 12 and 11 hours respectively have been reported.  Lines of trucks have been as long as 15 kilometers in both cities, according to the National Chamber of Trucking (Canacar), forcing drivers to endure torturously long waits.”

The article goes on to state, “In Tijuana, Baja California, and Reynosa, Tamaulipas, respective wait times of eight and seven hours have been reported at border crossings and more than 1,000 trucks remain stranded in both cities.  The delays have been attributed to a decision by United States Customs and Border Protection to withdraw personnel from border crossings to help deal with an influx of migrants into the U.S. Some lanes at ports of entry have been closed as a result.”

U.S. Customs and Border Protection is being allocated to assist Border Patrol.   CBP is redeploying staff from many ports of entry, with 545 officers redeployed thus far.  They will redeploy up to 750 officers, who will be deployed for 30 days.  There is currently no plan to redeploy officers from the northern border, but if this continues throughout the summer, all CBP workforce could be impacted by deployment.  The rail has not been impacted at this time, which already operates with a minimal staff.

After they reach 750 officers redeployed, they will start pulling CBP officers from major airports.  This will cause a slowdown in U.S. Customs in airports across the country.  By the way, there is no special consideration or options for tourists.

The CBP officer stated that passenger and cargo wait times are significantly increasing across all of the southern border.  Cargo at El Paso has an approximate wait time of 7 hours vs. 1 hour just one year ago. Other ports are in a similar situation with a 3-4 hour wait time vs. 1 hour or less wait time just one year ago.  CBP is trying to give priority to C-TPAT and FAST organizations, but has no control over the queuing on the Mexico side of the border.  Scarbrough also has a direct link to the border wait times on our homepage. The U.S. ocean ports have not yet been affected by this, but one can forecast high airline rates because of increasing demand.

Furthermore, the CBP officer on the conference call mentioned that trucks are waiting overnight in a queue to be processed first thing in the morning, which means CBP is starting each day extremely behind because of the back up from the day before.  It was noted that CBP will not displace the officers working on narcotics and drug trafficking issues.

Holy Week has typically seen a historic spike in crossings, which is expected to increase again this year bringing further impact and delays.  This means that cargo exams will also take longer due to staff shortages.  Some ports are closing weekend cargo processing in order to deploy staff to weekday cargo processing. All cargo processing is being impacted and choosing an alternate port may have a little benefit.  Feel free to reach out to our Southern Border Operation Manager for other options at scamarillo@scarbrough-intl.com.

The officer reiterated the entire system is in a meltdown and the cargo and port of entries are part of it.  There is an “unacceptable” number of people in custody, which has reached 13,000.

The CBP officer on the conference call also mentioned that other Department of Homeland Security workforce areas were being considered for deployment such as the U.S. Coastguard and FEMA, if they have the necessary skill set including law enforcement training, etc.  Right now, CBP is the only area being redeployed.

Field managers on the ground at each port of entry are making the decisions on changes in hours of operations to accommodate the waiting trucks.  Notices will be sent out through their regular channels of communication.

Our own Southern Border Operations Manager was able to secure the hours of operation for the Port of Laredo, where Scarbrough has an office on both sides of the border: 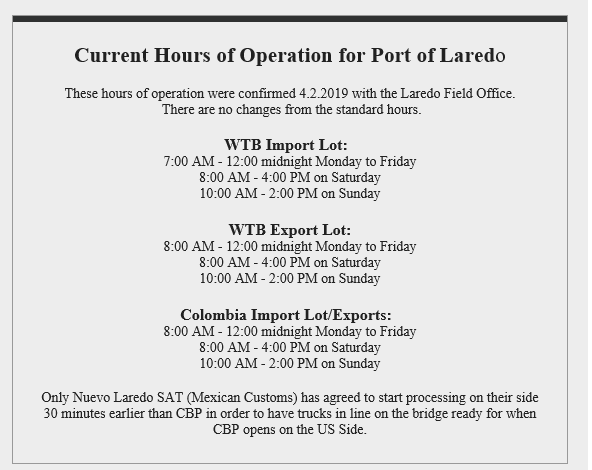 CBP is working to set up weekly or bi-weekly calls.

Note, there is limited space. The next call will be: