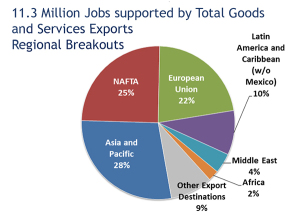 What is an export to Canada actually worth?

We know that Canada has always been an important trade partner with the United States, and we know that total exports to Canada were more than $360 billion in 2013, but new data released from the International Trade Administration (ITA) now give more insight into the value of U.S. exports by destination than just dollar amounts.

What are exports to Canada worth? How about nearly 1.7 million U.S. jobs?

New data from ITA show exports to Canada supporting more jobs than any other U.S. export market, with Mexico as a close second at about 1.1 million. Other top destinations were China, Japan, and the United Kingdom.

The exports to these countries alone supported nearly 4.8 million U.S. jobs last year, which is almost as much as the entire populations of Chicago and Houston combined.

Here are some more quick facts we learned from this new data that you can impress your friends with:

Want to learn more? Check out the full report online.

So now that you’re the most well-informed member of your friend group, spread the word about how exporting is growing our economy. Talk to your local U.S. Export Assistance Center to find out how to make your business go global.