According to the Wall Street Journal, “Ukrainian farmers are holding on to grain to protect themselves against declines in the country’s currency amid tensions with Russia, making exports from its Back Sea ports increasing difficult, the U.S. Grains council mentioned a couple weeks ago.

Strained shipments of grain from Ukraine, a major wheat and corn exporter could lead to increased demand for U.S. crops from North Africa, the Middle East and China.”

Right now is the time that really affects U.S. farmers, especially when trying to make decisions on crops this spring. How will this affect the U.S.?  Exports could rise, but it could also lead to a grain shortage, leading to higher prices… or a corn shortage for that matter, which is Ukraine’s other top export product.

“A couple of generations ago, farmers were mostly concerned about how their neighbors’ crops looked. Today it’s equally important to understand what’s happening on the other side of the planet,” said Casey Langan, spokesman for the Wisconsin Farm Bureau Federation. 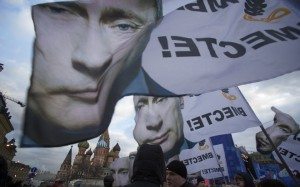 To read more on how decisions on the other side of the world can affect our everyday farmer, click here.