The Union Pacific Railroad is investing approximately $4.5 million in the rail across the Nebraska-Iowa state lines, between Omaha, Nebraska and Missouri Valley, Iowa. The Project is funded entirely by Union Pacific without taxpayer dollars.

U-P is replacing 31,700 concrete railroad ties and installing 16,670 tons of rock along the line that runs from Omaha to Missouri Valley, Iowa. U-P is also renewing the surfaces at 29 road crossings so drivers will notice an impact as work continues, decreases wait time.

The project is one of nearly 1,500 Union Pacific will complete across its 32,000-mile network this year. Mark Davis, Union Pacific’s Spokesman says from 2007 to 2013 U-P invested more than $21.6-billion on the network and operations to support the rail program.  The Omaha to Missouri Valley line project will be finished by the end of May and just began on March 5. 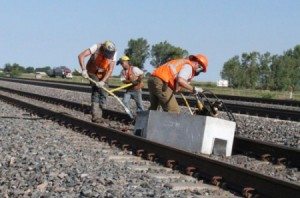 Improved and additional freight rail capacity helps reduce highway congestion and contributes to a cleaner environment. One Union Pacific train can take up to 300 trucks off America’s roads, and Union Pacific can move one ton of freight nearly 500 miles on a single gallon of diesel fuel.