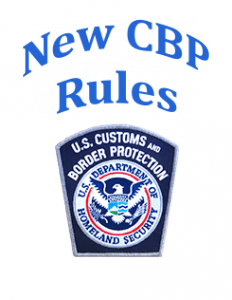 The departments of Homeland Security and the Treasury recently issued their semiannual regulatory agendas, which list the following regulations affecting international trade that could be issued within the next year as well as rulemaking proceedings that have been in process for some time and are not as likely to see further progress in the near term. The expected timeframes for issuance of these rules are indicated in parentheses.

– a final rule allowing U.S. Customs and Border Protection to disclose to an intellectual property right holder information appearing on merchandise or its retail packaging that may comprise information otherwise protected by the Trade Secrets Act for the purpose of assisting CBP in determining whether the merchandise bears a counterfeit mark (February)

– separate proposed rules from the Alcohol and Tobacco Tax and Trade Bureau to update procedures forimports and exports of distilled spirits, wine, beer and tobacco products and implement the International Trade Data System all-electronic environment (April (imports) and May (exports))

– a CBP proposed rule to give effect to certain liberalized changes to the NAFTA preference rules of origin that have been agreed to by the U.S., Canada and Mexico