The Ambassador Bridge has reopened and is currently allowing one lane of inbound traffic to flow into the US. One outbound lane to Canada will be opened as soon as additional debris is cleared. CBP has been advised that traffic backups are significant due to the closure (2 lanes of traffic back about 7 miles waiting to cross the bridge). CBP is prepared to process the surge of traffic accordingly.

A vehicle fire shut down traffic on the Ambassador Bridge, officials said today. 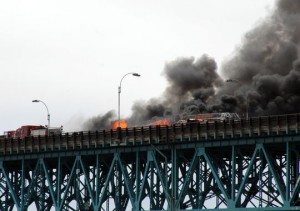 Mickey Blashfield, spokesman for the Ambassador Bridge Co., said a pickup hauling a small trailer caught fire on the American approach to the bridge, sending smoke billowing into the air. He said traffic was stopped in both directions, but crews are working to clear the scene and get traffic flowing again on the busy international crossing.

How long it will take to clear up the scene is unclear, Blashfield said.

He said the Fire department provided a quick response.

The cause of the fire remains unclear.

U.S. Customs and Border Protection Chief Officer Ken Hammond Sr. said the bridge company closed all traffic and the Detroit Fire Department is on the scene.

“We are prepared to process traffic once DFD and the bridge company clears the scene,” Hammond said in an e-mail. He said U.S.-bound traffic can use the Detroit Windsor Tunnel as an alternate crossing location.

CBP wishes to advise the trade community that all other crossings within the Detroit Port of Entry (POE) remain open, as well as, operations at the Blue Water Bridge crossing in Port Huron, Michigan.  If you and/or your clients plan to divert to PH, please be reminded of the following information regarding e-manifest and the entry transmissions;

Please be reminded that there are some conditions where the entry must be cancelled (summary filed or not) and a new one must be filed in PH (certified from the CF7501, FDA regulated, AGR), but all others will be accommodated and processed at primary if at all possible.

Updates will be provided as additional information becomes available.