The International Maritime Organization’s Maritime’s Safety Committee said there would be no delay in the implementation of the verified gross mass rule, however, a three month grace period urged by the industry stake holders is likely to occur.

As stated in American Shipper,

“There are no doubt still a number of grey areas,” Peregrine Storrs-Fox, the risk management director at the insurer TT Club said. “In order to give time for these to be resolved, the IMO’s intent is that any party who has done its level best to comply, even if it has not technically fulfilled the letter of the law, may expect to be treated with understanding. Those, however who have done little or nothing can expect to be penalized.”

The idea is to bring the new rule into effect in phases. The first phase being 3 months of sorting out any issues that may arise, such as communication and documentation of the data.

The 19 ocean carrier members of the Ocean Carrier Equipment Management Association (OCEMA) are collaborating with six major East and Gulf coast port authorities to establish a harmonized container weighing process plan by allowing marine terminals to use certified scales to provide the verified gross mass of containers if the shipper desires.

Requirements still need to be discussed between the port authorities, carriers and the Federal Maritime Commission.  The NCBFAA just recently sent a letter to FMC urging them to accept.
Ports to offer VGM Weighing Service:

According to Maritime Executive, “Some American ports – including Oakland, Long Beach, and Los Angeles – have announced that they will not be creating a unified policy on VGM, and will leave the decision up to individual terminal operators to create their own policies. Earlier this month, the business association for the 13 terminal operators at Los Angeles and Long Beach said that their terminals lacked infrastructure to supply VGM weighing services, and each terminal would decide whether to refuse entry to unweighed containers.”

However, according to American Shipper, OCEMA is also initiating a similar plan as stated above directly with the West Coast terminals through the “Pacific Ports Operational Improvement Agreement.” 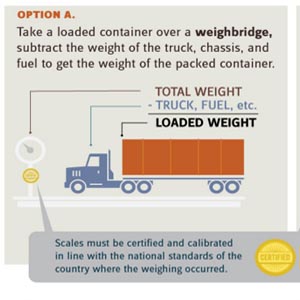 Question and Answer Forum: SOLAS Weight Verification Requirement Revisited
Starting July 1 2016, shippers will be required to verify the packed container weight of their cargo or else…. what? In hopes questions that are left unanswered, will have answers, we plan to bring our experts back. View previous webinar held by Scarbrough University.