The ports of Los Angeles and Long Beach broke container volume records in March, as they worked off the cargo backlog that developed during the contentious dockworker contract negotiations between the International Longshore and Warehouse Union and its employers earlier this year.

The Port of Los Angeles said it handled 791,863 TEUs in March, 17.3 percent more than in the same period last year, as terminals sought to clear congestion that developed during the final months of labor negotiations which resulted in a tentative contract agreement being announced by the ILWU and Pacific Maritime Association on Feb. 20.

It was the second busiest month in the port’s history after October 2006, and all the more unusual because it came outside of the normal fall peak season for the container shipping industry.

Even with the very busy March, containerized cargo volumes at Los Angeles in the first three month of 2015 were 1,823,854 TEUs, or down 5 percent, compared to the same period in 2014.
During the labor contract negotiations, PMA accused the union of slowdowns, and employers curtailed hours at many terminals rather than pay shift differentials for what it said was reduced productivity. 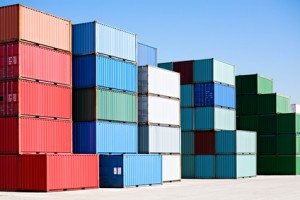 At the Port of Long Beach 630,084 TEUs were handled in March, a 32 percent increase over the same month last year.

That was the busiest March ever and the busiest month for containerized cargo in Long Beach since August 2013.
In Long Beach, imports were recorded at 317,520 TEUs, a 42.1 percent increase from last year. Exports decreased 17.3 percent to 127,337 TEUs. Empty containers increased 85.4 percent to 185,227 TEUs. As in Los Angeles, despite the strong month, cargo at the Port of Long Beach was down 3.3 percent for the first three months of the year when compared to the first quarter of 2014.

“March container volumes were robust as our terminals worked aggressively to clear out the backlog of vessels,” said Port of Los Angeles Executive Director Gene Seroka. “The number of ships waiting at anchor has reduced significantly, labor levels are strong and our container terminals are extremely active. We continue to work on a series of initiatives to improve efficiencies throughout the supply chain.”

On Thursday morning, the Marine Exchange of Southern California said there were only seven ships at anchor outside the ports of Los Angeles and Long Beach, including four containerships. That’s down from a peak of 35 ships and 29 containerships before the tentative agreement was announced.

The new Pacific Ports Operational Improvements Agreement will allow the parties to discuss and exchange information, and reach agreement on measures to address and improve efficiency of operations at U.S. West Coast port facilities to reduce congestion.

“Given the exigent circumstances related to congestion, this agreement’s effectiveness is timely. Through this agreement, the parties seek to address issues that could help to alleviate the congestion that is plaguing U.S. Pacific Coast ports,” said FMC Chairman Mario Cordero. “While the agreement has great potential to achieve this goal, the commission will closely monitor the activities of the agreement to identify emerging 6(g) concerns and act quickly should it become necessary. As the primary gateways for trade between the U.S. and Asia, the ports along the U.S. Pacific Coast play an important role in ensuring the efficient flow of goods in and out of the United States. This agreement is an example of supply chain participants cooperating and working together under the authority of the Shipping Act to improve port productivity, innovation, and efficiency.”

The ports measure their volumes based on how many containers come on and off ships.

PierPass, an organization that encourages drayage drivers to deliver and pick-up containers from terminals at night in order to reduce daytime traffic on the highways around Los Angeles and Long Beach also reported dramatic increases in container traffic in and out of the terminals in March 2015.

The PierPass numbers only include this is truck-borne cargo and exclude on-dock rail.