Hapag-Lloyd says widespread congestion at West Coast ports has resulted from a surge in imports from shippers moving cargo early because of concern of of possible labor action on the U.S. West Coast.

It said at the ports of Los Angeles and Long Beach, “rail cargo is still impacted with delays and increased dwell times. We expect this situation to further deteriorate with continuous surge of import volumes.”

In Vancouver, Canada, the carrier said that “an increase in volumes diverted away from U.S. West Coast, coupled with limited allocation in rail cars to U.S. corridors, has resulted in significant congestion and increased dwell times. 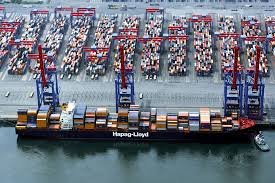 In another development, Unifor, Canada’s largest union, announced that trucking companies are not living up to their end of the deal reached in March that ended a strike of local drayage drivers.   The Vancouver Sun reported that Unifor director Gavin McGarrigle said companies are “thumbing their nose” at the 14-point action plan devised after the strike in March. Recent press reports find that Unifor represents around 400 drivers, but about 1,000 represented by United Truckers Association of British Columbia also were involved in the strike.

“Drivers went back to work. We upheld our end of the bargain. We expect the government to do the same,” said Paul Johal, President of the Unifor-Vancouver Container Truckers’ Association (VCTA).  “We don’t want to strike again, but we won’t have a choice if the government doesn’t meet its obligations.”

Hapag-Lloyd said it is also monitoring the situation in the ports of Seattle and Tacoma.   A shortage of truck power “continues and is also contributing to the delays,” Hapag-Lloyd said.