Weights and Measures … A Future Mandate for Containers?

The International Maritime Organization (IMO) will require verification of container weights received from some shipper groups and the mandate has been drafted.   According to Chris Gillis of American Shipper, “The IMO Maritime Safety Committee (MSC) is expected to approve the draft amendments in May 2014 and the final adoption should follow in November 2014, with implementation as early as July 2016.” 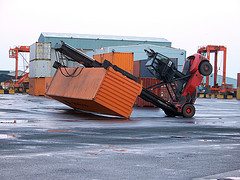 So, why would it be important to know the weight of the containers for vessel lading?

Lack of knowledge of the weight of a container or deliberate misrepresentation can lead to disastrous consequences for those who handle vessel carriers and container equipment.  For example, on the sea, a ship will roll, pitch, heave, yaw, sway and surge.  Imagine what the containers go through during a storm.  Containers leaving U.S. ports are already weights and trucks traveling on roads are also weights because road limits must be obeyed.

If a container were overweight before loading the vessel, it could easily damage some other shipper’s container.  If the containers were to break lose, they can hurt the vessel, the environment and even a crew member.  It is important that the containers are weighed before lading to avoid these situations.  Furthermore, I know many consignees would be happy to learn they no longer have to pay overweight charges at destination in instances that shippers refused to consider the weight at origin.  Truck scales are not as plentiful in some parts of the world as they are in the United States, but their price tag is in the tens of thousands of dollars, a fraction of a container crane and less than many other pieces of equipment found in every container terminal.  This could be why it makes it hard to believe that a weight mandate at origin can be done.

The proposed SOLAS amendment was supported by the World Shipping Council and the Global Shippers Forum (which includes the largest U.S. shipper organization, the National Industrial Transportation League) who worked to make it more shipper-friendly.  But it has been called “ineffective” by the European Shippers’ Council and the European and international freight forwarders associations CLECAT and FIATA. The Asian Shippers’ Council has said the measure is “doomed to fail” and even compared it to the proposal for 100 percent screening of containers in the United States.  The ESC and ASC are important speakers for shipper interests, but we think they are wrong on this issue. Truck scales are a modestly priced piece of technology, and we are sure there will be terminals, governments and entrepreneurs that will install such equipment either at container terminals or inland locations and offer weighing services.

There is even a provision in the IMO regulation that allows shippers to weigh the individual items going into containers, dunnage material, and add it to the tare (empty) weight of the containers for a total weight calculation.

Opponents of the IMO proposal say the evidence isn’t there that overweight containers are responsible for some of the major ship casualties they have been blamed for, and perhaps that’s true. And they say some carriers rely on estimated weights when cargo is booked and don’t adjust stowage plans when updated weights are provided as containers enter terminals. If so, carriers need to do a better job at adjusting their information in real time.

The overall goal is to improve safety at sea, at terminals and on the railroads and roads.