Excerpt from American Journal of Transportation  |  By: Stas Margaronis | November 21, 2014

According to sources familiar with the talks, negotiations between the two parties, is expected to take place today (Friday November 21st).

Originally, it was reported negotiations for a new West Coast longshore contract would not resume until December, citing a spokesman for the International Longshore and Warehouse Union (ILWU).

ILWU spokesman, Craig Merilees, told AJOT the ILWU had offered to continue negotiations with the Pacific Maritime Association (PMA) up to November 27th (Thanksgiving) but had received no response from the PMA. The latest information suggests ongoing talks although the status of the negotiations going forward with the holiday week approaching is uncertain.

In regards to the timing of the talks, Merilees cautioned that there may be mitigating circumstances in the PMA’s decision not to resume talks right away related to new ILWU proposals.

He cautioned, “ maybe you shouldn’t read too much into this.”

However, a Port of Los Angeles official, who asked not to be identified, said that he was surprised that both sides would not resume negotiations until December. 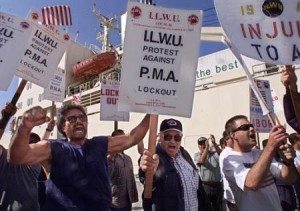 As of November 20th, there were 12 vessels, including 9 container ships, at anchor waiting to unload at the Ports of Long Beach and Los Angeles, according to the Port of Los Angeles. This is almost identical to the same number of vessels that were waiting to anchor last week, indicating that the slowdown in operations continues at the same pace.

The Port of Los Angeles official said that he has been staring out his window at the same container ship berthed at the Port all week “and I don’t see much happening,” the official said.

He said the work stoppage was the normal response by the ILWU when a work related death in the harbor occurs.

The Los Angeles official says that Christmas cargoes arrived early at the two ports this year and should not result in many shortages at stores during the holiday season,