The West Coast Port Congestion Slowdown has had a serious impact on U.S. retailers, suppliers, and distributors.  In fact, it has had a huge impact on businesses across the globe.

Negotiations between the International Longshoremen and Warehouse Union (ILWU) and the Pacific Maritime Association (PMA) have been going on 9 months.  There are a number of items to be agreed upon in the contract that expired summer 2014.

It’s true that negotiations have been a part of the slowdown, but we can’t forget about the other factors that have contributed to the situation, such as the new megaships holding a significant increase in containers, available equipment at the piers, and chassis shortages.  What other factors have played a major role in the chaos?  Check it out here.

This situation has had an effect on our nation’s GDP as the cargo that comes through those ports is 12.5% of GDP and can affect over 18 million jobs.

In fact, a West Coast Shutdown occurred in 2002 for 10 days.  It cost the economy $1 Billion per day.  A recent INFORUM forecasting study says it would cost the economy 2.5 billion dollars per day. [Source] [Source2]

Matthew Shay, President and CEO of the National Retail Federation (NRF), rattles off some interesting facts in this quick video message.

Visit NBCNews.com for breaking news, world news, and news about the economy

How is the Situation affecting the economy?

Products aren’t making it to shelves, so this is affecting the middle class the most as prices are being driven up.  The key retail imports that are being affected are apparel, footwear, household items, and consumer electronics.  There are inventory delays for production or much needed product to provide services.  For example, 95% of personal protection equipment used in medical institutions comes from overseas, i.e. gloves, masks. 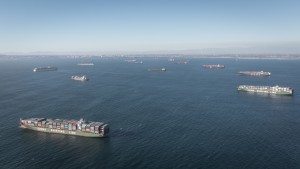 On any given day this month, there is around 25 container ships waiting to berth, sitting offshore in LA/Long Beach and 15 container ships offshore in Oakland. [check out the photos here and to the left, courtesy of Mike Kelly Photography] Usually takes a few days to unload a container, now it takes weeks.  Again, there are a myriad of issues that have caused this.

As mentioned before, this situation has not only affected our own economy, but those across the globe.  Agricultural products are rotting at the port instead of making their way to Asia.  Check out this article, “California’s famous navel oranges and Washington’s apples are rotting in the hot L.A. sun.”  At Christmas, trees were thrown out because they couldn’t export them in time and potatoes couldn’t be exported to Japan, which actually caused a “french fry shortage” at McDonalds.

In fact, check out this quote from a Northwest potato farmer back in November.  [source]

“As it stands right now, I have potatoes I am shipping to many countries (nearly 50 containers just this week alone). So far I have shipped about 6 containers and may not have any more than 3 to 5 more containers shipped this week. If this continues or if there is a labor lock out, my buyers would be forced to buy from another country because they would need stable supply. I grew our potatoes on contract for them, so when I miss these sales, I do not get them back. So every day and every week is to us – very detrimental that we get labor working and the ports servicing the national best interest which is to help agricultural goods continue to expand and be exported from a quality growing area like Washington.”

Matt Shaw mentioned that “Yes, they have been urging involvement since before the holidays.” [Source]

The White House claims it is keeping a close eye on the situation and monitoring it closely. Last week,  the Administration sent in Labor Secretary, Thomas Perez, to speed up negotiations but he can’t force a settlement, which is up to ILWU and PMA. [Source]

According to American Shipper on Feb. 20, 2015, “Perez yesterday gave the two sides until Friday to reach an agreement or he would move the negotiations to Washington, Port of Los Angeles Executive Director Gene Seroka said a a meeting of the port’s board of harbor commissioners on Thursday.  [source] “I suspect we are heading in a direction where some kind of resolution could come sooner rather than later,” Shaiken said on during an hour-long discussion on National Public Radio’s “Diane Rehm Show.”   (An audio replay of the “Diane Rehm Show” is available here.)

I have gathered some of our newsletter readers’ opinions, statements, and thoughts about the West Coast Port Congestion situation.

We’d love to hear from you too!  Please don’t hesitate to send me an email. I will add your opinion anonymously to our blog.