What are the Panama Papers? A guide to the biggest data leak in history

What are the Panama Papers? A guide to the biggest data leak in history

The Panama Papers are an unprecedented leak of 11.5m files from the database of the world’s fourth biggest offshore law firm, Mossack Fonseca. The records were obtained from an anonymous source by the German newspaper Süddeutsche Zeitung, which shared them with the International Consortium of Investigative Journalists (ICIJ). The ICIJ then shared them with a large network of international partners, including the Guardian and the BBC.

What do they reveal?
The documents show the myriad ways in which the rich can exploit secretive offshore tax regimes. Twelve national leaders are among 143 politicians, their families and close associates from around the world known to have been using offshore tax havens.

A $2bn trail leads all the way to Vladimir Putin. The Russian president’s best friend – a cellist called Sergei Roldugin – is at the centre of a scheme in which money from Russian state banks is hidden offshore. Some of it ends up in a ski resort where in 2013 Putin’s daughter Katerina got married.

What is Mossack Fonseca?
It is a Panama-based law firm whose services include incorporating companies in offshore jurisdictions such as the British Virgin Islands. It administers offshore firms for a yearly fee. Other services include wealth management.

Where is it based?
The firm is Panamanian but runs a worldwide operation. Its website boasts of a global network with 600 people working in 42 countries. It has franchises around the world, where separately owned affiliates sign up new customers and have exclusive rights to use its brand. Mossack Fonseca operates in tax havens including Switzerland, Cyprus and the British Virgin Islands, and in the British crown dependencies Guernsey, Jersey and the Isle of Man.

The transfer of wealth
The hiding places
Mossack Fonseca data seen by the Guardian relates to more than 200,000 companies for which the firm acted as registered agent. Often used lawfully to anonymously hold property and bank accounts, these companies were registered in a range of tax havens and this map shows the most popular locations among its clients. The British Virgin Islands held more than 100,000 companies. 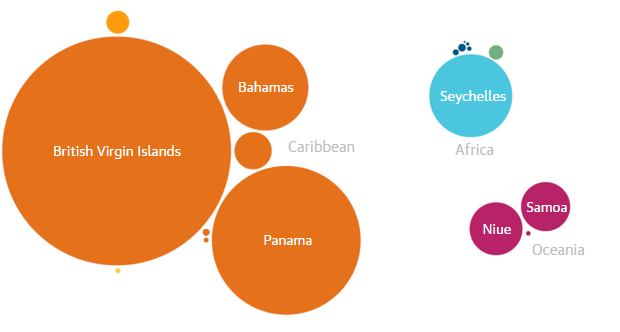 The intermediaries
Rather than dealing directly with company owners, Mossack Fonseca mostly acted on instructions from intermediaries, usually accountants, lawyers, banks and trust companies. In Europe, these offshore facilitators are concentrated in Switzerland, Jersey, Luxembourg and the United Kingdom. 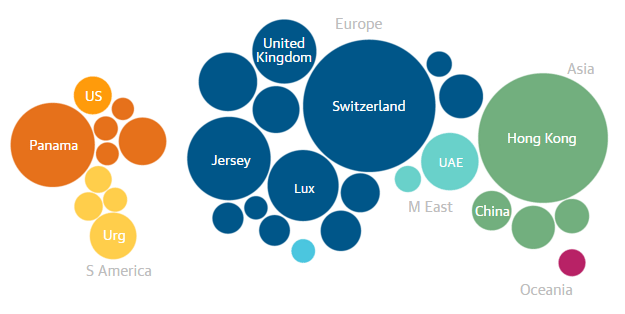 The hidden owners
Where does the money flowing offshore come from? The information is hard to discover because real owners usually hide behind nominees, people with no real control and no assets in the company who simply lend their signature. A small sample of about 13,000 owners from all over the world, recently compiled by Mossack Fonseca, gives some indication. China and Russia top the list. 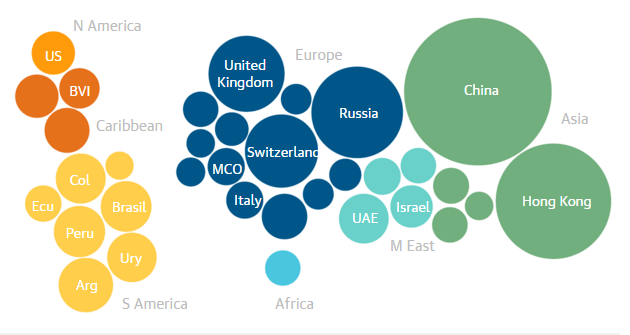 How big is it?
Mossack Fonseca is the world’s fourth biggest provider of offshore services. It has acted for more than 300,000 companies. There is a strong UK connection. More than half of the companies are registered in British-administered tax havens, as well as in the UK itself.

How much data has been leaked?
A lot. The leak is one of the biggest ever – larger than the US diplomatic cables released by WikiLeaks in 2010, and the secret intelligence documents given to journalists by Edward Snowden in 2013. There are 11.5m documents and 2.6 terabytes of information drawn from Mossack Fonseca’s internal database.

Are all people who use offshore structures crooks?
No. Using offshore structures is entirely legal. There are many legitimate reasons for doing so. Business people in countries such as Russia and Ukraine typically put their assets offshore to defend them from “raids” by criminals, and to get around hard currency restrictions. Others use offshore for reasons of inheritance and estate planning.

Are some people who use offshore structures crooks?
Yes. In a speech last year in Singapore, David Cameron said “the corrupt, criminals and money launderers” take advantage of anonymous company structures. The government is trying to do something about this. It wants to set up a central register that will reveal the beneficial owners of offshore companies. From June, UK companies will have to reveal their “significant” owners for the first time.

What does Mossack Fonseca say about the leak?
The firm won’t discuss specific cases of alleged wrongdoing, citing client confidentiality. But it robustly defends its conduct. Mossack Fonseca says it complies with anti-money-laundering laws and carries out thorough due diligence on all its clients. It says it regrets any misuse of its services and tries actively to prevent it. The firm says it cannot be blamed for failings by intermediaries, who include banks, law firms and accountants.