What lies in store for shippers in the coming year? Several trends bear watching—including the latest moves by the nation’s largest online retailer.

Each January for the past several years, I have tried to predict what’s in store for us in the coming months. Some of my predictions have been reliable, while others have not—for example, I really thought the Dallas Cowboys would be in the Super Bowl in 2014.

I hope to do a bit better with my predictions for the supply chain world, where the outlook for 2015 is somewhat mixed. On the one hand, it’s pretty clear that the industry will continue to struggle with such longstanding challenges as driver shortages, infrastructure issues, and government regulations. On the other, there’s plenty of cause for optimism. As 2014 draws to a close, the economy continues to improve, with job creation numbers showing particular strength. On top of that, truckers and shippers alike have benefited from a sharp decline in diesel fuel prices—down almost 28 cents per gallon from late 2013 levels. There is every reason to expect this to continue, at least for the first few months of the new year. 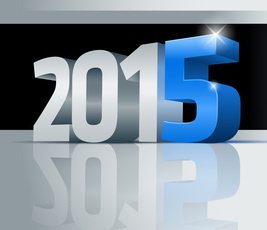 Still, there are plenty of unknowns out there. Looking ahead, I see five other developments that bear watching:

Already somewhat of a trendsetter in the industry, the online retail giant will likely continue to set the standard for online shopping. Whether it involves drones, robots, huge distribution centers, or Sunday deliveries, there’s no question Amazon leads the field when it comes to innovation. I think it is important, however, to recognize Amazon for what it really is—a mega-logistics service provider. I believe its competitors will start to seek ways to capitalize—at least partially—on Amazon’s strengths, rather than try to compete head on.

In May of 2015, Congress will once again be forced to deal with the can it kicked down the road last year with regard to the funding of road and bridge projects. This time around, extending the present funding will not be an option, as legislators are under enormous pressure to come up with some type of plan. Even so, don’t expect to see a comprehensive solution to this critical problem.

As FedEx and UPS shift parcel customers over to dimensional or “dim” weight pricing (a system of pricing shipments based on weight and cube, rather than weight alone), I believe we will see some innovations in package design. Since there has been no significant penalty for shipping air and packing materials, shippers have had no real reason to make substantial changes. I think that’s about to change and that the end result will be more efficient and cost-effective packaging. In addition, I think it’s only a matter of time before dim weight pricing spreads to the less-than-truckload (LTL) sector.

The trend toward bringing production back to (or near) the U.S. will continue, although in my opinion, progress will be slow. Although there are cost and human relations reasons for moving out of Asia, the major commitments and investments some manufacturers have made there will make it extremely difficult to reverse earlier decisions.

The coming year will be challenging for some logistics service providers (LSPs), particularly those that lag behind when it comes to technology and processes. The marketplace has become increasingly commoditized, with users of outsourcing services coming to view these offerings as basically interchangeable. That means what some providers have considered to be value-added services have become expected offerings—the price of admission to the bidding process. It will be a good year for LSPs to take a hard look at the value they are offering, particularly in such areas as visibility and analytical capabilities.

Whatever challenges the new year might bring, there’s reason for hope. In the difficult past few years, most supply chain managers have demonstrated an uncanny ability to capitalize on both the positive and the negative. This year will be no different.