Where is the Market Going?

In recent weeks, I attended the Journal of Commerce’s TPM conference in Long Beach, California.  Over 2000 attendees came in from all over the world for an annual briefing and network gathering catered to the Trans-Pacific and global container shipping community.  Each year, the event includes conference programs with speeches, panel discussions and roundtables facing industry market trends and news.  We have conversations and learn from the best for four full days.  We discuss anything from how transportation management systems drive value for shippers to solving the “Chassis Problem.”

One thing we discussed and I have my own opinion on is the container capacity issue and rates.  Carriers continue to throw General Rate Increases (GRI) at us, yet reduce the base rates before the GRI is implemented.  What do I think?  They simply won’t stick. I think the carriers will continue to periodically market GRI’s, but forwarders and BCO’s will obtain reductions and negotiate mitigations, prior to GRI deadlines. Furthermore, I believe the rates will settle in the first of June and for the most part, we rely on a benchmark rates for the rest of the year.  Keep in mind it is our duty and goal to get the real market rate by May so we can all identify the rates we are going to work with for the remainder of the year.

With that said, I think we will find that rates will average 6-12 percent lower than last year’s market average which wasn’t an impressive figure to start with. The steamship lines are facing some of the same issues the airlines faced years back. I would like to preface my comment by saying much easier said than done. Action plan should involve mergers, buyouts, less sailing rotations, and less equipment. This would create a true demand in the market that is real. Until that happens the steamship industry will suffer a slow painful decline. 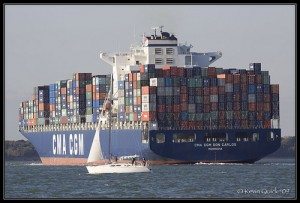 As mentioned before, I believe that alliances are less likely this year and mergers will occur.  For example, just 2 weeks ago CSAV and Hapag Lloyd merged.  I think this will continue to happen among the other carriers.  There is capacity!  As some of the carriers learn they can’t compete, another carrier will acquire that line.  There are already bigger and better ships ordered, which have more fuel efficiencies than those in the past.  This will only lead to more capacity and more mergers.

Keep in mind these mega ships are the future of our shipping industry, but they also come with a long list of dollars spent.  For example, one must keep the following in mind:  port improvements to handle these ships, rail capacity, rail function to handle larger flows of cargo, and the rail yards’ receiving, labor and trucking capacity. These are just to name a few that come with handling these mega ships.

I’m very excited to be a part of an industry that will have so many critical decisions to make that will impact our industry for years to come. Let’s all provide best wishes and support for the leaders involved in fixing a broken market and provide support where we can.