The Obama administration is monitoring the contract negotiations. Meanwhile, some carriers are rescinding their port congestion surcharges.

Excerpt from American Shipper |  BY CHRIS DUPIN | NOVEMBER 18, 2014
The White House made a brief comment Tuesday about the ongoing labor talks between the International Longshore and Warehouse Union and employers, stating it is monitoring the negotiations and expressed confidence the two sides will reach a contract agreement.

Referring to the contract reached between employers and union dockworkers on the East and Gulf coasts last year, Assistant White House Press Secretary Frank Benenati remarked, “just last year, there was a long negotiation at the East and Gulf coast ports. And just as the two sides in that case were able to resolve their differences through the time-tested process of collective bargaining, we’re confident that management and labor at the West Coast ports can do the same thing.

“They’re at the table trying to work it out, and we’re confident that there’s a way forward. We continue to monitor the situation,” he added. 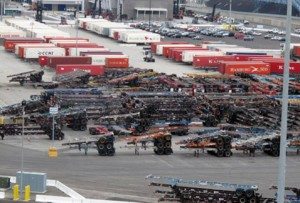 ILWU spokesman Craig Merrilees said it “seems to me the White House is doing a good job of monitoring the situation and expects the parties to negotiate a settlement through the collective bargaining process.”

Meanwhile, it appears some container shipping lines are responding to the pushback from shippers and the U.S. Federal Maritime Commission over their plan to implement hefty $1,000 per 40-foot container congestion surcharges on boxes entering or exiting West Coast ports by abruptly announcing they will postpone implementing those surcharges.

For example, OOCL released a customer notice announcing a congestion surcharge on Nov. 18, only to withdraw it the same day, “until further notice.”

Evergreen posted a similar notice saying that a surcharge it announced on Friday for implementation on Monday will be postponed, despite “very difficult conditions created by the ongoing congestion.”“We ask for your consideration and understanding that the conditions continues to exist as we informed you in our Nov. 14 notice. The ongoing congestion at the major U.S. West Coast ports causing serious interference with our service schedule and terminal operations are causing significant financial losses,” Evergreen said.