The White House on Saturday said it would intervene in stalled labor talks at West Coast ports, sending the Labor secretary to meet with both parties and urge them to complete a new contract and avoid further slowdowns.

Fears have mounted in recent days that the Pacific Maritime Association, which represents employers, and the International Longshore and Warehouse Union may be at an impasse. In 2002, stalled negotiations between the two groups resulted in a 10-day lockout, costing the economy an estimated $1 billion a day and requiring the Bush administration step in and invoke its power under the Taft-Hartley Act.

“Out of concern for the economic consequences of further delay, the president has directed Secretary of Labor Tom Perez to travel to California to meet with the parties to urge them to resolve their dispute quickly at the bargaining table,” White House spokesman Eric Schultz said in a statement. 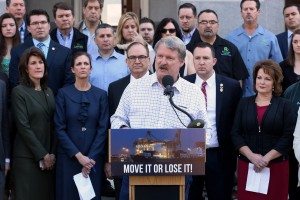 The administration became involved as 36 ships were anchored outside the ports of Los Angeles and Long Beach, Calif., after the PMA suspended vessel loading and unloading operations through Monday. Earlier this week, there were about 20 ships at anchor. A year ago, there were none.

{Paul Wenger, center, president of the California Farm Bureau Federation, joins lawmakers and business representatives in Sacramento, Calif, on Friday to call for a resolution to the labor dispute at West Coast ports. PHOTO: ASSOCIATED PRESS}

The West Coast slowdowns, in addition to structural issues causing congestion at the ports, have snarled U.S. supply chains in recent months. Shippers ranging from retailers to Japanese auto manufacturers have had to spend more money to ship cargo by air, while others have switched ports or ordered early as West Coast ports became more unpredictable.

Industry groups and politicians—including the U.S. Chamber of Commerce, the National Retail Federation and a bipartisan group in Congress—in recent days have stepped up calls on the White House to intervene.

“The White House is responding to a great deal of pressure,” said international trade economist Jock O’Connell. A federal mediator has already been involved for a month, and the two sides are still struggling, so it is unclear how much Mr. Perez can help, he said.

If the federal mediator has been unsuccessful, “it doesn’t seem to me that having the presence of the secretary of Labor there will make any difference other than they might be a little more polite in their conversations,” Mr. O’Connell added.

The PMA and the ILWU have been at the negotiation table for nine months in an attempt to complete a new contract for port employees. While a couple of important issues—including health-care benefits—have been resolved, negotiations have stalled on the issue of arbitration. The union would like each party to be able to terminate arbitrators, who act as judges in disputes between the union and employers, at the end of each contract. The PMA would like to keep the current rule, which requires both parties to come to an agreement before firing an arbitrator.

The National Retail Federation expressed its support of the White House’s decision on Saturday, saying it hopes the move “recommits the two sides to reaching a deal. The slowdowns, congestion and suspensions at the West Coast ports need to end now.”