As the debate over trade policy heats up in Washington and around the country, the Obama administration released this week a report highlighting the positive effects of enhanced U.S. trade and free trade agreements. The White House is working to secure trade promotion authority to expedite congressional consideration of the FTAs it is negotiating with Asia-Pacific countries and the European Union, and the report’s findings could be used to counter the arguments of those who say these agreements will leave the U.S. worse off.

As might be expected, the report emphasizes the importance of exports to the U.S. economy and the role of FTAs in expanding outbound shipments. The report contends that with nearly 70 percent of U.S. imports entering duty-free, the primary impact of new FTAs would be to lower the barriers faced by U.S. exporters in foreign markets, including average tariffs of 6.8 percent and “numerous non-tariff barriers.” As exports increase, the report adds, so do wages for domestic employees.

Studies show that export-intensive industries pay workers up to 18 percent more, and the average industry’s export growth over the past 20 years translated into $1,300 in higher annual earnings for the typical middle-class worker. During the same period export increases also yielded an eight percent gain in labor productivity.

There are benefits on the import side as well, the report acknowledges. About half of all U.S. imports are inputs that businesses use to produce final goods, which lowers production costs by making a greater variety of inputs available at lower prices. 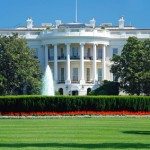 Trade also allows U.S. consumers to buy a wider variety of goods at lower prices; in fact, research estimates that the three-fold increase in the variety of imported goods between 1972 and 2001 provides U.S. consumers with value equivalent to 2.6 percent of gross domestic product, and the reduction in U.S. tariffs since 1945 has contributed an additional 7.3 percent to U.S. GDP. Compared to a world with no trade, the report asserts, median-income consumers gain an estimated 29 percent of their purchasing power from trade.
{Photo Source: Depositphotos.com/Vacclav}

The report goes after one of the favorite arguments of trade skeptics by asserting that U.S. trade agreements do not change the rate of U.S. investment abroad (i.e., outsourcing of jobs). What does increase this phenomenon, the report states, is when other countries negotiate trade deals with China. The reason is that trade agreements with China “offer countries preferential access to the vast Chinese market while accepting low labor and environmental standards,” which increases U.S. foreign direct investment in those countries. U.S. FTAs, on the other hand, “raise standards across the board and help U.S. businesses export to foreign markets while still producing goods here.”

Those higher standards benefit trading partners as well as the U.S. According to the report, research suggests that trade has helped decrease poverty by raising wages around the world and also finds that expanding U.S. market access promotes higher-quality employment in less-developed countries as workers shift from informal to formal employment. Moreover, “for every one percent increase in income as a result of trade liberalization, pollution concentrations fall by one percent” because “the adoption of clean technologies spread through trade more than offsets emissions resulting from increased transportation or production.” The report also finds positive associations between lower tariffs and reductions in the gender wage gap and discrimination based on race and immigration status.