China is taking preventative measures to stop the Zika Virus spread from shippers located in the affected areas.

As of July 12, 2016, there were 22 imported Zika virus cases reported in the China mainland [source.] Since then, Chinese authorities have taken a step further to avoid importing more cases of the virus. According to Chris Dupin of American Shipper,

“Chinese authorities have said that containers from certain countries shall be subject to effective anti-mosquito treatment in order to prevent the virus from spreading, which has left many shippers concerned.”

They must provide a mosquito extermination certificate for the container. If no certificate is provided, the buyer must fumigate the cargo at arrival at the port of destination.

For example, Evergreen Shipping Line sent a notice on August 11, 2016 stating the following: 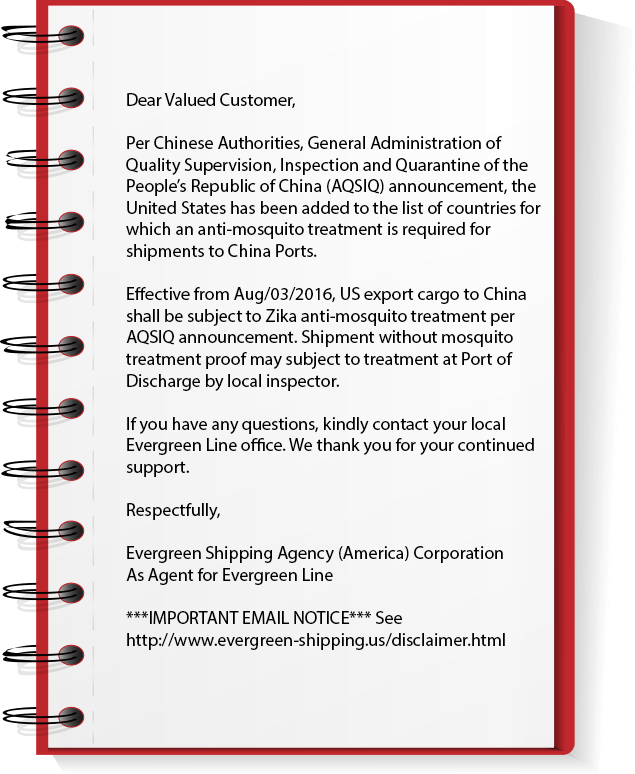 American Shipper continues to explain how APHIS is replying to this decision, which just issued a document entitled, Field Operations Guidance – China Zika virus requirements for US exports, which read:

“APHIS is currently discussing China’s new Zika virus health issue requirements with Chinese authorities. We are requesting clarification on which agricultural commodities and production areas of the U.S. are included in the requirements.

APHIS is inquiring about what specific form(s) of acceptable documentation can be submitted to Chinese officials by exporters, and other details of the new requirements. The need for accurate information will take time and official guidance will be sent out by APHIS in the future.”