Canadian Rail Could go on Strike

The Montreal-based railroad, Canada’s largest, had said it was prepared to lock out employees represented by Unifor—which counts clerical workers, truck drivers and mechanics as members—on Monday evening unless the two sides came to an agreement after months of negotiations. The previous contract between the railroad and Unifor expired Dec. 31.

Terms of the new tentative agreement weren’t immediately available, and in a statement Unifor said details wouldn’t be revealed until after the ratification process. That is expected to last three weeks.

Claude Mongeau, CN chief executive, said in a statement the company and union were able to find common ground, and the result is a tentative deal that avoids a labor disruption “that would have harmed CN’s employees, its customers and the Canadian economy.”

Unifor President Jerry Dias said his negotiators were “able to find solutions to the concerns raised by our members.”

In the event of a lockout, CN said its managers were prepared to fill in for employees represented by Unifor, though it warned customers the labor dispute could have adversely affected service, according to a memo the railroad issued to customers seen by The Wall Street Journal.

Canadian Rail Could go on Strike

According to the Financial Post, published February 18, 2015, “Only two days after the strike at Canadian Pacific Railway Ltd. ended, shippers may need to begin preparing for another countrywide rail strike, this time at Canadian National Railway Co.

The dispute centres on CN’s refusal to contribute to a union “action fund.” It may sound like a minor disagreement, but it could prove to be a deal-breaker.

“I believe, in my heart of hearts, that we’re going to have a strike at CN,” Jerry Dias, president of the Unifor union, said in an interview Wednesday.

According to CN, Unifor rejected a settlement offer made Sunday that calls for a three-year agreement with 3% wage increases in each year and benefit improvements that are in-line with recent contracts negotiated by the United Steelworkers and Teamsters Canada unions.” [Source] 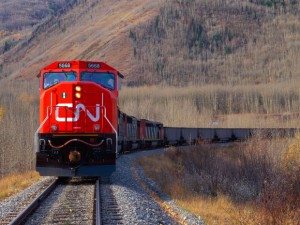 After five months of negotiations between Canadian National (CN) Rail and its employees represented by Unifor, Unifor President Jerry Dias has announced the union will be commencing strike votes at CN as of early next week. The union will be setting a strike deadline close to the end of March with no firm date set.  The strike vote process will take up to three weeks, along with the ratification process where members at CP will vote on their new contract.  Unifor is the largest union at CN with more than 4,800 members. The current collective agreement expired on December 31, 2014 and negotiations had been taking place since September. [Source]

According to a release by the Journal of Commerce, “Two days after a short-lived strike at Canadian Pacific Railway came to a close Monday,  the possibility of a worker walkout began to gain momentum at CN, the single largest railway in Canada. A strike would not hurt only Canadian shippers, but also U.S. shippers that have increasingly re-routed cargo through Canadian ports, namely Port Metro Vancouver and Port of Prince Rupert, to avoid West Coast port congestion.” [Source]