al businesses go global. The goal is to add 100 new exporters in five years.  The slogan is #GoGlobalKC.

Working with JP Morgan and Chase and the Brookings Institute, Scarbrough & other local companies had the privilege to sit on the Global Cities Initiative Steering Committee, overseen by The World Trade Center of Kansas City and co-chaired by Chris Gutierrez of KC SmartPort and Paul Weida of Black & Veatch, which undertook extensive research, focus groups, and data analysis in order to create the export plan itself.  Kansas City is one of 28 “global cities,” and now part of a network aimed at fostering exports and building markets across the globe.

“includes four strategies for boosting the number of regional exporters, including the establishment of the Export Concierge program, which according to the plan will provide personal, one-to-one guidance to current and prospective exporters, helping them navigate — from entry to export — the complex process of entry into foreign markets.”

The region includes almost 500 small and midsize companies “ripe for expansion,” the export plan states, and “with minimal education and assistance, these companies could become part of the region’s global economy.” 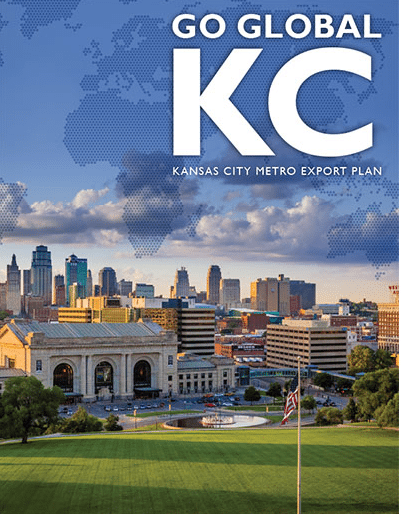 “With the knowledge that some 95 percent of the world’s consumers live outside the U.S., and (that) more than 80 percent of global gross domestic product growth is expected to occur outside the U.S., the Kansas City Metro Export Plan seeks to position the region to take advantage of these vital global growth opportunities,” Paul Weida and Chris Gutierrez said in a written statement introducing the plan.

<< Click the image to view the KC Metro Export Plan

Read the GCI Export Plan’s goal, objectives, strategies and tactics on how Kansas City will tackle adding 100 new exporters and increase Kansas City’s export numbers in the next five years. The guide also lists all implementation partners in the region that serve as a guide and partner to potential and current exporters.

It’s also good to note this export plan couldn’t come at a better time as the Trans-Pacific Partnership, an agreement that has been in the making for seven years, introduces the idea to knock down foreign barriers to make it easier for American-made products to be exported out of the U.S.A.

Federal, State, and Local Programs to Assist in Support:

If your company is looking to expand its sales, then let us help!  We can connect you with the right people and become your partner for international trade.  If you are ready to put your company on the map, click here.