It is widely known that the ILWU and PMA finally made a tentative agreement on February 20, 2015.  Now, a couple weeks later, backlogs at the Ports are improving, but according to top officials at the Journal of Commerce TPM Conference last week [Source] it will be

at least 3 months before the Ports of LA and Long Beach are back to normal.

Furthermore, Robert Garcia, Mayor of Long Beach, indicated at the TPM Conference 2015 that mayors across the West Coast worked together on a daily basis for the past 9 months.  They created a very close collaborative relationship and are continuing to work together to solve the port congestion issue.   They are ensuring a solution by:

In addition, Doug Drummond, President of the Port of Long Beach, mentioned that the Port of LB wants to take the lead in an industry-wide coalition that will work together to rethink and reorganize current methods of operations.  They want to create an industry-wide solution for smooth operating reliability at the ports and made a commitment that there will never be a repeat situation like this one again.  The West Coast Ports stated that they realize that shippers have choices on where to route their freight, and they want shippers to continue to choose them.  Mr. Drummond went on to mention all the projects they are taking on to improve infrastructure. 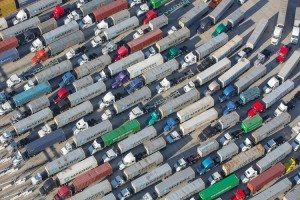 Some Reasons for the Port Congestion

Some of the other issues that still need to be tackled include capacity for mega-ships and bigger cargo volumes, carrier alliances, chassis shortages, and truck capacity.  Check out other reasons for the Port Congestion Problem here.

Some of these issues are already being worked through.  For example, the Antitrust Division of the U.S. Department of Justice just gave the green light for the Ports of Long beach and Los Angeles to implement its chassis-sharing scheme.

“The increased flexibility created by the interchangeability will enhance customer service, improve chassis productivity and respond to the desire of the Long Beach and Los Angeles ports authorities to achieve better overall utilization of the region’s chassis fleets,” said Justice spokesmen. [Source]

The implementation of the Gray Chassis Fleet began on March 2, 2015.  The “Gray Chassis Pool,” works off an agreement between Direct ChassisLink Inc. (DCLI), Flexi-Van Leasing Inc. and TRAC Intermodal makes it easier for terminal operators and truckers to obtain needed chassis.  The agreement allows the chassis at the ports to be used interchangeably. [Source]

To read more even more details about the chassis pool, click here.

What to expect with Rates

The carrier alliances also pay a big role at the ports and it looks like we can see a big rates increase in the near future.  Major players comprising the Transpacific Stabilization Agreement (TSA) are standing firm on raising rates.  Restoring service levels and further ramping up to meet sustained and rising demand will, in turn, entail significant operational costs, carriers are forecasting.

Toward that end TSA has reaffirmed its  March 16 general rate increase (GRI) of $600 per 40-foot container (FEU) for all shipments, and lines have also filed a previously announced April 9 GRI in the same amount. [Source]

Not only are the ocean carriers raising rates, but we can expect that spot truckload rates from LA will rise as the congestion continues to clear.  Read more about it here.